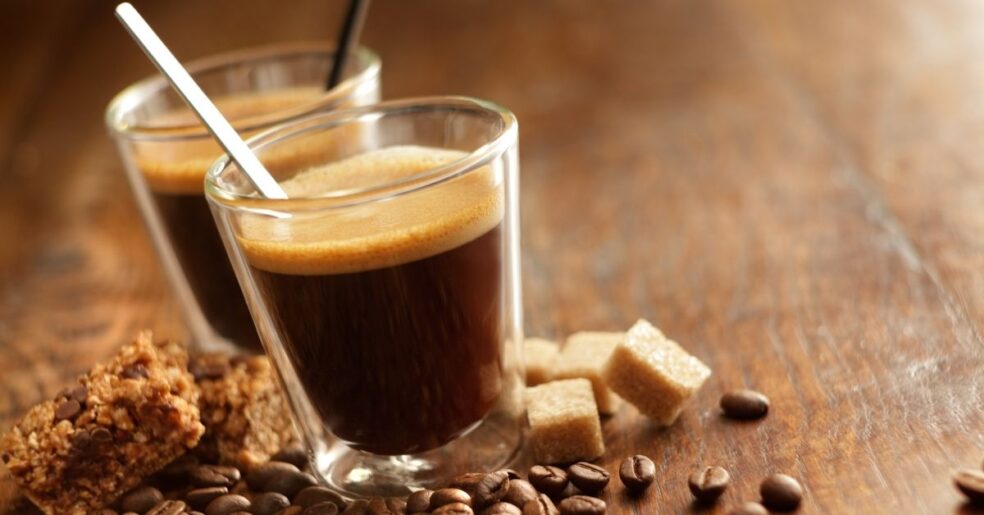 Who doesn’t love a well-made espresso? The full-bodied flavor, the sweet crema…it’s the perfect drink! But sometimes, you may want your espresso to be a little less intense and a little larger than the standard 1 oz. Enter the lungo coffee!

A caffè lungo is a variation on a normal espresso. The difference is that it uses more water and has a longer extraction time. The result is a diluted espresso that’s about twice the size of a regular one.

That’s a lungo in a nutshell. But, if you are

What Is A Lungo?

A lungo (Italian for “long”) is essentially an espresso made with a longer pull. A traditional espresso is made by pulling 1 oz of water through finely-ground coffee for about 30 seconds. By comparison, a lungo pulls 2 oz of water for about a minute.

Even though the water volume and extraction time are both doubled, a lungo shot uses the same amount of ground coffee beans as a single espresso!

As you might expect, this gives lungo coffee a more diluted flavor profile than regular espresso. But the longer pull affects the taste profile in other ways as well.

Why Is Lungo More Bitter?

A long pull adds more bitterness to the espresso because the bitterest flavors are the last ones extracted from the bean.

By comparison, a regular espresso pull will stop extraction before a lot of these bitter notes come out.

Why Does Lungo Have More Caffeine?

Almost all of the coffee’s available caffeine is extracted in the first minute. And since regular espresso shots is pulled in 30 seconds, it still leaves a bit of caffeine in the coffee grounds.

How To Make A Lungo

Because a lungo is an espresso, you’ll definitely need an espresso machine to pull this one off!

Let’s take a quick look at both methods.

Making A Lungo With A Semi-Automatic Espresso Machine

If you’ve got a machine that requires you to grind and tamp the coffee, you’re probably dealing with a semi-automatic machine.

To make a lungo here, you’ll need to:

Since you’re using just enough ground coffee for one shot but using enough water for two shots, the result will be a mild lungo shot.

Making A Lungo With A Super-Automatic Espresso Machine

If you’ve got a super-automatic Nespresso machine, make sure you use lungo pods to make a Caffe lungo.

While you won’t break anything by using normal espresso pods for lungo size coffee, it will affect the aromas and flavors you get in the cup.

Making a lungo with Nespresso is as simple as placing the lungo pod in the machine and pressing the lungo button with the large coffee mug icon.

The lungo isn’t the only variation on the espresso. Not by a long shot! (Pun definitely intended!)

There are tons of espresso-based drinks out there and each has its own unique name. Because of this, it’s easy for the average coffee lover to get all these coffee beverages mixed up!

But no matter how many regional variations are out there, most of these drinks are just

Let’s go through a few of these drinks and see if we can clear up any confusion.

Ristretto is Italian for “restricted”. This drink is essentially a normal espresso that’s been pulled with less water. So, instead of an ounce of water, you’ll pull about half an ounce for around 15 seconds.

Because not all of the coffee’s compounds are extracted at the same time. Some are extracted faster, others slower. And restricted pull will result in a fuller body and less bitter espresso than a regular pull.

A doppio is the same amount as the lungo shot (2 oz) but while the lungo is watery, the doppio has all the strength of a regular shot of espresso.

And while you may not have heard the term “doppio” that often, this is the standard size for espressos pulled outside of Italy.

Ever noticed how many espresso machines have double spouts? It’s because they use a doppio size portafilter and split the shot into two singles.

An americano is an espresso that’s been diluted with water. (The espresso to water ratio isn’t too important here.)

To prepare it a regular shot of espresso is pulled in a large cup. Then hot water is added to the espresso.

The end result is a cup of coffee that tastes similar to coffee made from a drip coffee machine.

The story goes that this drink was invented during WWII for American soldiers who didn’t like the espresso’s strong flavor.

A long black is a type of espresso you’ll find in Australia or New Zealand. It’s an espresso that’s been added to a cup of water.

With an Americano it’s the espresso first, with hot water added afterward.

The difference may seem trivial, but the long black does retain the espresso’s crema better.

Lattes And Other Milk-Based Espressos

Unlike the previous drinks that either restricted or added water to the espresso, a latte adds milk.

Specifically, a latte contains a single shot of espresso, steamed milk, and foamed milk on top.

Other types of milk-based espressos are:

There are tons more espresso and milk drinks out there, but they’re mostly a combination of espresso coffee and various amounts of prepared milk.

Does Lungo Coffee Have Milk?

Traditionally, a lungo shot does not contain any milk. It’s just a regular espresso shot that’s been pulled with double the amount of water.

However, this question seems to come up because of Nespresso’s naming convention.

Here’s what I mean.

Nespresso machines can brew espresso lungo (or ristrettos) by pressing more (or less) water through the coffee pods. This is exactly what you’d expect based on the name.

But Nespresso also has recipes that use a lungo or ristretto as the base. For example, “Lungo Macchiato” or “Ristretto Cappuccino”.

These recipes do have milk added.

So, while a traditional lungo shot doesn’t have milk, a lungo-based Nespresso recipe can definitely have milk!

Lungo coffee is a must-try drink for any coffee lover who wants a caffeine kick!

The longer pull gives it a higher caffeine content than the average espresso, but its flavors aren’t as concentrated as a normal espresso shot, so you’ll find it a smoother, milder drink.

If you’ve been wanting something stronger than drip coffee but weaker than espresso then this is it!

And if you’re a fan of the lungo shot or any other espresso drink variation, let us know in the comments below!