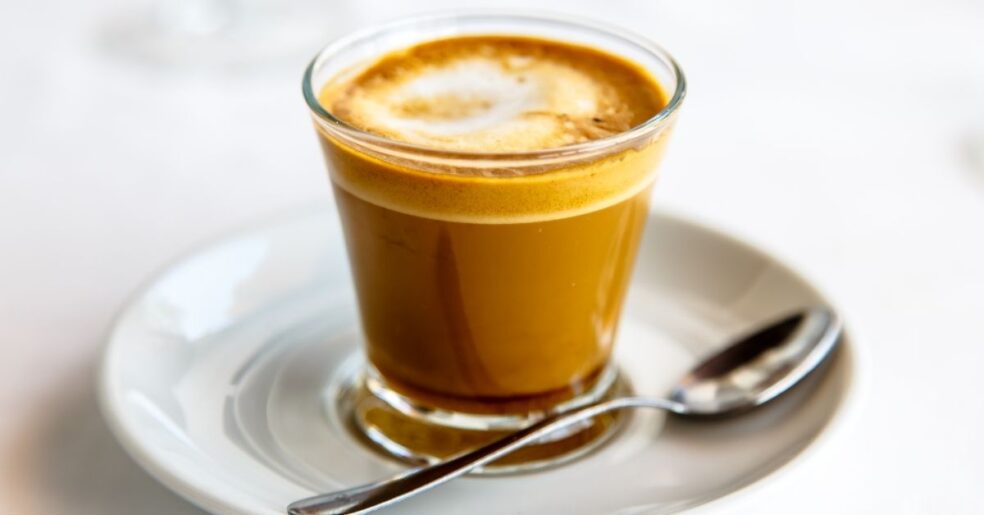 I’ve always loved coffee but I could never tolerate really strong coffee like espressos or double brews. So, when I went to visit my (now) wife in Spain she’d always order me something called a “cortado”. At the time I had no idea what she was ordering. But I quickly found out it’s delicious! So what is a cortado?

A cortado is essentially an espresso that’s been “cut” with an equal part of steamed milk. So, with a cortado, you get a strong coffee flavor but it’s not as overwhelming as a straight espresso.

While this variation on the espresso originated in Spain, you don’t have to hop on the next flight to try it!

In the next few minutes, we’ll tell you everything there is to know about this drink, including how to order it at Starbucks and make it yourself at home!

What is a Cortado?

A cortado is equal parts espresso and steamed milk. The drink gets its name from the Spanish word meaning “cut” because the milk literally cuts through the intensity of the espresso.

Traditionally, a cortado is a hot coffee drink that comes in a 4-ounce glass and can be ordered in coffee shops all over Spain.

Cortado Recipe: How to Make a Cortado?

To make your own cortado, you’ll need a 4-ounce glass, an espresso machine with a steam wand, your favorite coffee beans, and some milk.

Here’s a quick summary of the steps:

Because a cortado is made with steamed milk (not frothed!), an espresso machine with a steam wand is an essential piece of equipment.

To make sure your milk has the right silky texture, keep your steam wand entirely submerged in the milk during the steaming process. This method cuts the air introduced into the milk and produces a ‘flat’ steamed milk as opposed to frothy milk.

Also, some wands have a setting for making cappuccinos, make sure this isn’t used.

All in all, as long as you’ve got the right equipment on hand, making a cortado is super easy! But if you don’t have the equipment, you can always try out this coffee drink at Starbucks.

How to Order a Cortado at Starbucks?

If you want a cortado at Starbucks, your best bet is to describe the drink. Tell the barista you want 2 shots of espresso with 2 ounces of steamed milk.

Just asking the barista for a “cortado” is more likely to get you a puzzled look than an actual drink!

Where Did The Cortado Originate?

The cortado is one of the espresso drinks that originated in Spain.

Originating in the Northern Basque region, it quickly spread throughout the whole country and onwards into Portugal. It first appeared in the U.S. in the city of San Francisco.

In the U.S. it is often referred to as the ‘Gibraltar,’ as this was the name of the cup it was often served in.

Which Coffee Beans Are Best For Making a Cortado?

Any beans that produce a good shot of espresso will be suitable for making a cortado. Within that range a lot of the choice is down to personal taste.

Personally, I enjoy using a medium-dark roast. This ensures a robust espresso that isn’t too diluted by the milk.

How Does The Cortado Compare To Other Drinks?

Very favorably in my humble opinion! In this section, we are going to have a quick look at the differences (and similarities) between the cortado and other coffee beverage.

The most basic difference between these two drinks is the amount of milk used. A latte will generally consist of a shot of espresso in a larger sized cup which is then filled with milk and is often topped with a layer of micro-foam.

(Micro-foam consists of the tiny bubbles that are generated during the steaming process, it is these bubbles that give the milk its creamy, almost silky texture.)

A Latte will generally be sized between six and 20 ounces and can have one or more shots of espresso.

Cortados are a fifty-fifty espresso to milk ratio and without the layer of micro-foam on top. And unlike Lattes which can vary in size, aficionados will claim anything that isn’t 4 ounces in size, isn’t a true Cortado.

Once again, the main difference between these two drinks is the ratio of milk to coffee. A macchiato will generally consist of one or two shots of espresso with just a touch of frothed milk on top.

In Italian, the word ‘macchiato’ means stained or tainted, hence the name is applied to an espresso that is ‘stained’ with milk.

In general terms a Macchiato will have a ratio of two parts coffee to one-part milk, the milk is there simply to soften a strong or acidic flavor.

The difference between these two drinks can be more subtle with the cortado sometimes referred to as a flat white. But there are differences.

The flat white originated down under in Australia and consists of a double shot of espresso topped up with micro-foamed milk. Served in small 5.5-ounce cups it can, with some justification be called a small latte.

The main difference between the drinks is the consistency of the milk that is used. A flat white uses milk that has more micro-foam than the cortado, essentially giving it a smoother and more velvety texture.

Of course, with a double shot flat white, there can also be a size difference between the two drinks.

Whereas the cortado can be defined by its very size, the same cannot be claimed by the cappuccino. In its Italian birthplace the cappuccino is traditionally a small 6-ounce size, other countries now offer the cappuccino in a variety of sizes.

It differs from cortado both in the ratio of espresso to milk and in the milk preparation. A cappuccino will generally consist of a single espresso shot with three parts milk.

The milk is highly frothed to produce more and larger micro-bubbles than would be considered proper for use in a cortado.

The cortadito is a Cuban variation on the cortado. The main difference lies in the type of milk added to the espresso. Whereas the cortado uses fresh milk, a cortadito generally uses heated sweetened, condensed milk.

A cortadito is traditionally served in a special glass, often adorned with a metal ring around its base and a handle formed from a metal wire.

As we touched on earlier in the article, these two are the same drink. It is purely a regional thing, if you are in the U.S. and ask for a Gibraltar you will be served what elsewhere would be called a cortado.

However, try asking for a Gibraltar in Spain and all you are likely to get is a series of directions to a highly disputed rock situated at the entrance to the Mediterranean Sea!

The cortado is an excellent drink for people who love coffee but find pure espresso too intense. It’s a deceptively simple blend of espresso and warm milk that really one of life’s little luxuries.

If you’ve got the equipment, making it at home is easy enough, but if you don’t have an espresso machine around the house, try ordering 2 shots of espresso with 2 ounces of steams milk from Starbucks or your favorite coffee shop.