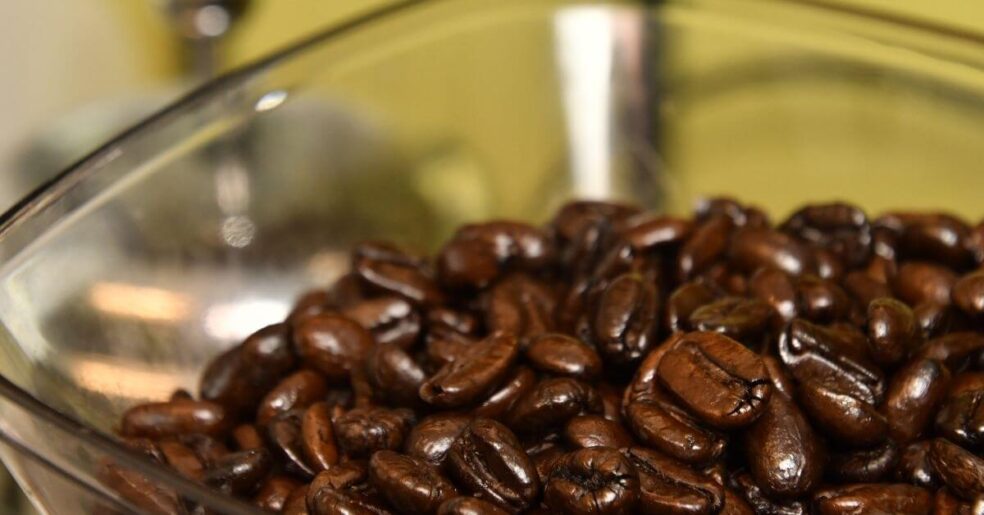 The first time I asked “what is French Roast Coffee?”, I was told that French Roast refers to the color of the roasted coffee beans. While that answer is true, it wasn’t very helpful. It didn’t help me decide whether French Roast was something I wanted to try or not. And I get the feeling that’s not the answer you’re looking for either. So, just what is French Roast?

French Roast Coffee is one of the regional dark roasts that originated in 19th century Europe. The beans are a dark chocolate color and very oily. Brewed French Roast coffee is known for having an intense flavor that some consider smoky and others consider burnt.

Despite the fact this roast is nearly burnt, French Roast Coffee is very popular (just check out the reviews on Amazon!) But there are other people who believe French Roasted coffee should be avoided for a number of reasons.

What Is The Best French Roast Coffee?

French Roast Coffee is one of the darkest out there, but it’s very popular.

If you’re ready to give this roast a try, here’s what we recommend…

This powerful roast is made from 100% Arabica Beans. And they’re sourced from several countries, which gives the blend a unique flavor combination.

If you’re looking for an amazing French Roast, Starbucks French Roast is definitely a top contender.

The beans are roasted until coffee oils rise to the surface of the beans and the coffee has notes of dark chocolate. These beans are sustainably grown and are packaged fresh every time.

Volcanica sells the finest quality coffee from volcanic regions around the globe. Their beans are freshly roasted every week and packaged fresh for shopping.

French Roast is Volcanica’s darkest roast available. It has an intense and smoky flavor that makes great espresso and is another popular choice among coffee drinkers.

French Roast doesn’t refer to where the beans come from. Coffee beans that are french roasted could have been grown in Colombia, Kenya, Indonesia, or anywhere else. The name only refers to how the beans are roasted.

Honestly, though, these European roasts have more similarities than differences. And you’ll even see conflicting information as to which roast is darkest.

To provide some consistency, the Specialty Coffee Association of America (SCAA) started naming the roast based on the color of the beans. So, according to the SCAA, it’s only considered French Roast if it’s within a specific color range.

The flavor of French Roast Coffee has been described as:

The darkness of the roast means almost none of the natural flavors of the bean remains. All of the flavor comes from the roasting process.

French roast also has very little acidity and a light body – meaning that doesn’t weigh heavily on the tongue.

If you’ve never tried French Roast before, expect it to be intense!

Go with a brewing method that has a relatively fast brew time. If the coffee brews for too long, it’ll over-extract and become a poor tasting cup of coffee.

Use A Courser Grind

Lastly, play with the grind size. Courser grounds have a lower extraction rate than finer grounds. So, if your brew is too intense, try a course grind.

How Is French Roast Coffee Made?

French Roast Coffee is put through an extensive roasting process at extreme temperatures. During this process, the bean will crack twice as temperatures rise.

The first crack occurs around 385 °F (196 °C). During the first crack, the future French Roast Beans start to release steam and expand in size. The bean’s sugars also start to caramelize

The second crack happens around 435 degrees Fahrenheit (224 °C). It’s here, that the oils start to seep to the surface of the bean and the beans start turning very dark brown.

For a roast to be considered French Roast (or any other dark roast for that matter) it has to go through the second crack.

How Much Caffeine Is in French Roast?

French roasts may taste more intense, but they contain less caffeine than light roast because caffeine is burned away during the roasting process!

I can’t give you a hard number for how much caffeine is in your French Roast coffee because the caffeine content is determined by:

Because French roasts are way at the dark end of the roasting spectrum, there are several popular coffees that are lighter, including:

Stopped before the second crack, a Full City roast offers a nice balance between the natural flavors of the bean and the flavors created by the roasting process.

Vienna Roasts are considered medium-dark roasts and heated just until the beans start dripping oil. With a Vienna roast, you get many of the natural flavors of the bean, with just a bit of the oily qualities of a dark roast.

French Roast vs Other Dark Roasts

As we’ve seen, French roasts are among the darkest coffee beans. Still, there are similar roasts that you can try:

Like the French Roast, Italian Roast is typically used for espressos. It’s a dark and oily bean with an intense coffee flavor.

If you’d like to try this one, Starbucks also makes Italian Roast. It’s slightly darker than their Espresso Roast but doesn’t have the smokiness normally associated with the French Roast.

When it comes to the darkest of the traditional brands, nothing beats the Spanish roasts. Dark as night, these beans are roasted far after the second crack and can taste charred or burned.

What’s the Difference Between French Roast Coffee And Colombian Coffee?

Both French Roast Coffee and Colombian Coffee are named after countries, but one refers to the roasting method and the other refers to the origin of the beans.

French Roast coffee refers to a style of roasting. It doesn’t have anything to do with where the beans were grown.

Colombian coffee, on the other hand, refers to coffee that was grown in Colombia. It doesn’t have anything to do with the roasting method.

Should You Avoid French Roast Coffee?

There are a lot of people out there who recommend avoiding French Roast Coffees. The reasons they generally have to do with freshness, flavor, and farmer exploitation.

In my opinion, none of these are reasons to avoid this specific roast.

One solution is to buy just enough coffee to last a few days. Also, storing your coffee in a cool, dark, airtight container will go a long way to keeping your beans fresh.

There’s nothing wrong with that either. Give it a try first and see how you like it!

Personally, this is the most…convincing…reason to avoid French Roasts that I’ve encountered.

Since French Roasts destroy the natural flavor of the bean, low-quality coffee beans can be used and the average coffee drinker will be none-the-wiser.

These inferior beans are usually sold at insanely low prices, which is said to make the whole system unsustainable.

That’s obviously not good, but one thing you can do is buy fair trade to promote fair treatment and sustainable systems.

When it comes to dark roast coffees, nothing is quite like the French Roast. It’s intense, it’s smoky and frankly, it’s not for the faint-of-heart.

If this roast is a little too dark for your taste, you can always go with a Full City or Vienna Roast.

But if you’re ready to give French Roast a shot (pun intended), pick up a bag and let us know how you like it!