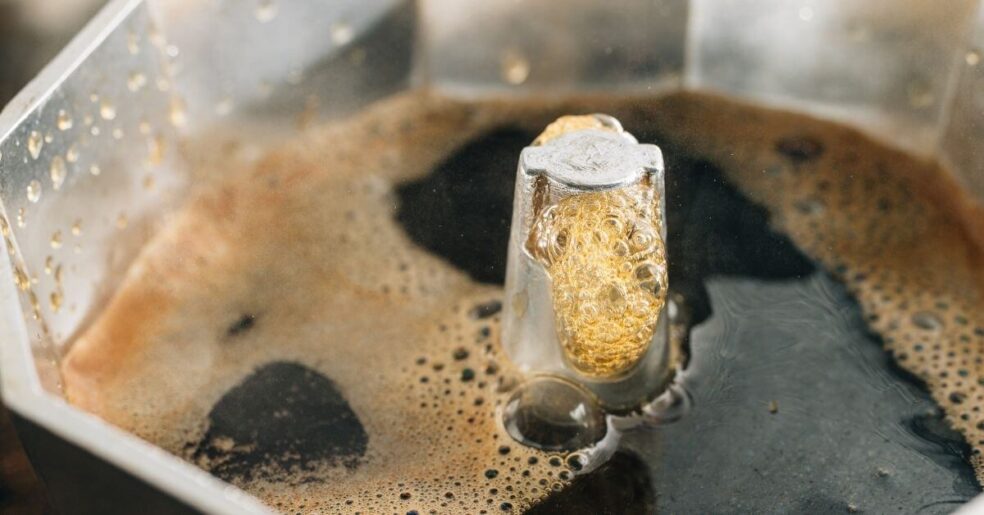 Moka Pots are known for being durable and easy to use, but sometimes these coffee makers can sputter unexpectedly. But why does a Moka Pot sputter?

In general, Moka Pots sputter because they’re unable to build up sufficient internal pressure. These brewers operate by using pressure to force the water up. However, if the Moka Pot is not sealed properly, pressure will escape and it won’t be able to push the water out in a constant stream.

While improper sealing is typically the root cause of a sputtering Moka Pot, there are several different reasons yours may not be sealed tightly.

Why Do Moka Pots Sputter?

Your Moka Pot may sputter at two different points in the brewing process; either at the beginning or at the end.

The reason for the sputtering depends on when it occurs.

Moka Pot Sputtering At The End Of The Brewing Process

A Moka Pot is at the end of the brewing process when the top chamber is already full of coffee and the last bit of coffee is coming out.

Moka Pots sputter at this point because:

High heat forces the water up quickly, but since there’s not much water remaining, a combination of air and water spurts out.

This is very normal and is not an issue at all.

However, if you don’t want your Moka Pot to sputter you can lower the heat. Alternatively, you can grab your Moka Pot by the handle and lift it a few inches above the heat source.

This will allow the coffee to come out at a slower and more controlled rate.

Moka Pot Sputtering At The Beginning Of The Brewing Process

If your Moka Pot is sputtering at the beginning of the brewing process, it’s most likely an issue of improper sealing. These brewers work using pressure and any gaps in the seal can prevent a smooth brew.

But since Moka Pots are comprised of many different parts, it may take some troubleshooting to determine exactly where the issue is.

Don’t worry though! We’ve got you covered.

We’re going to go over the 6 most common reasons Moka Pots sputter and what you can do to fix it.

1. The Funnel Doesn’t Fit Securely In The Lower Chamber

Your Moka Pot may be sputtering if the funnel isn’t adequately sealed against the lower chamber.

You may not be able to tell just by looking. So, to check if this is the issue, pour water into the lower chamber and place the funnel inside (without coffee grounds).

Then heat the bottom half of the Moka Pot.

Once the water starts boiling, use a utensil to press the funnel downward and notice whether water rises into the funnel.

(Be careful though, if the water boils too much it will push the funnel out of the Moka Pot chamber.)

If the water rises through the funnel your seal is fine. However, if the water doesn’t rise then the funnel isn’t sealing tightly against the lower chamber. (Notice in the image that our seal is ok.)

To fix it, you can use some PTFE Tape. (You can get PTFE Tape on Amazon or from your local hardware store.)

Wrap the PTFE tape around the outside of the funnel twice. Then push the tape upward against the lip of the funnel.

That should allow it to seal snugly against the lower chamber, and your Moka Pot should brew without sputtering.

2. A Damaged Rubber Gasket May Cause Your Moka Pot To Sputter

A Moka Pot may sputter if the rubber gasket is cracked or damaged.

The purpose of the rubber gasket is to ensure the upper and lower halves of the Moka Pot are tightly sealed against each other. If the gasket is in poor condition, it may allow pressure to escape which will cause sputtering.

To check this, remove the rubber gasket from the upper chamber and examine it. If it’s in bad shape you may need to get a new one.

In the picture below, you can see that our rubber gasket is a bit worn, but it still provides a good enough seal for our Moka Pot.

If this is your issue, you can purchase a new rubber gasket on Amazon. Just be sure you get the right brand and size for your Moka Pot.

3. Your Moka Pot May Not Be Screwed Together Tightly Enough

If you don’t screw the top and bottom halves of your Moka Pot together tightly, it may cause leakage and sputtering.

In this case, nothing is actually wrong with your Moka Pot. Your funnel and rubber gasket are both fine – which is good news!

Just make sure to use a towel or oven mitts if you’re going to tighten your Moka Pot when it’s hot!

4. Trapped Coffee Grounds Can Cause Sputtering

Sometimes, Moka Pots sputter because coffee grounds get stuck between the components. This can happen if we don’t clean our Moka Pot often or thoroughly enough.

Generally, there are three different places grounds might be trapped:

In the picture below, you can see we removed the rubber gasket and metal filter from the top chamber. Ours was fairly clean and there were no grinds trapped there.

We also checked the funnel and the spout that’s inside the top chamber for any stuck grounds.

5. A Bent Or Cracked Funnel Can Cause Pressure To Leak

Your Moka Pot may sputter if the funnel is bent or damaged.

It’s common for people to bang their funnel against the sink or trash can to discard used coffee grounds. But this method can also damage the funnel and prevent it from fitting properly inside the Moka Pot.

Check to see if there’s any damage to the component.

Depending on what kind of damage is done and where it’s located, you may be able to

Or you may have to

In the image below, you can see my husband emptying the funnel by banging it against the sink. (For demonstration purposes only!)

Don’t do this as it could damage your Moka Pot funnel.

6. Tamping Your Coffee Grounds Could Cause Sputtering

Tamping your coffee grounds could also cause a Moka Pot to sputter.

A Moka Pot’s internal pressure will push water up through the coffee grounds. Normally, the grounds are loose so the water can flow freely without much resistance.

However, when you tamp your coffee, you’re creating a denser bed of coffee grounds and it’s more difficult for the water to get through.

Because of this, the water may rise through the spout inconsistently and create sputtering.

To avoid this, don’t tamp your coffee grounds. (If you want to read more about what happens when you tamp a Moka Pot, we’ve got a whole post on it!)

Hopefully, this post helped you figure out why your Moka Pot was sputtering so you get back to brewing the perfect cup of coffee.

There are a number of reasons your Moka Pot may be sputtering, but the root cause is typically a lack of pressure due to improper sealing.

Check over your brewer to make sure no parts are damaged or dirty. And if you need replacement parts, make sure you order the right size for your Moka Pot.

On the other hand, if you’ve got your Moka Pot working again, take care of it by