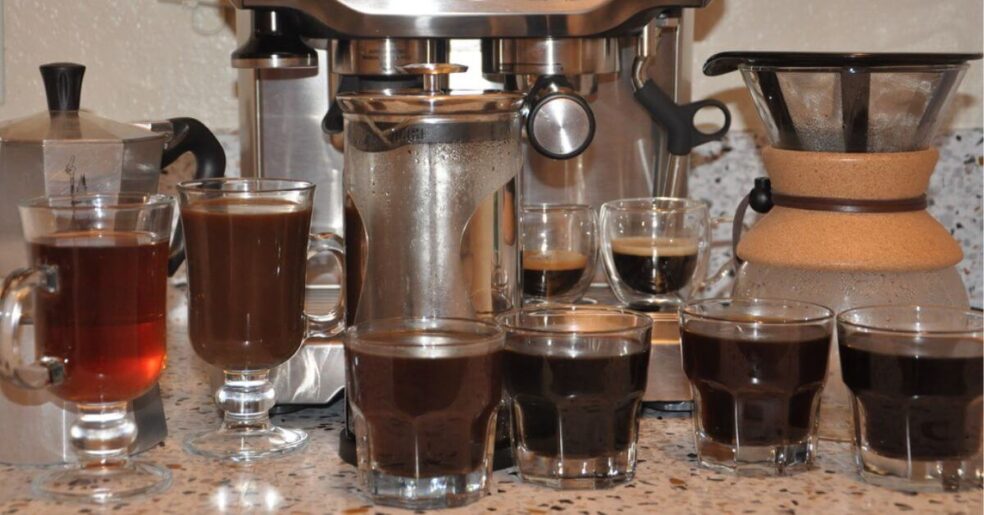 A lot of factors go into brewing a great cup of coffee, and your coffee grinds are among the most important. But can you use coffee grounds twice? And what will your coffee taste like if you do?

In general, you should not use coffee grounds twice. Most of the coffee’s acids, sugars, and oils are removed during the first brew, so a second brew will contain mostly bitter plant fibers. In addition, oxygen in the water will break down any of the remaining flavors that do remain in the bean.

Keep reading to learn more and see what happened when we brewed our coffee grounds twice.

Can I Use Coffee Grounds Twice?

We generally don’t recommend using coffee grounds twice. There are two primary reasons for this:

Let’s quickly talk about each one of these reasons.

Coffee beans are composed of acids, sugars, oils, and plant fibers. Each one of these components is extracted at different rates and each adds a different flavor to your coffee.

These different extraction rates present a problem when you try to use your coffee grounds twice.

During the first brew, most of the acids, oils, and sugars are extracted. So, during a second brew, you’ll extract mostly plant fibers, which results in a weak and bitter coffee.

Oxygen can quickly break down the flavor compounds in coffee. To minimize this, it’s recommended to keep coffee beans sealed in airtight containers and to grind your beans right before brewing.

However, it’s not just the air that causes oxidation; the oxygen in water also breaks down coffee compounds.

If you decide to brew your coffee grounds for a second time, they will have been exposed to a lot of oxygen because they’re ground, and also because they’re soaked in water.

And of course, the level of oxidation depends on how long your coffee grounds sat out before you try to reuse them.

What Will Happen If I Use Coffee Grounds Twice?

As a general rule, brewing the same coffee grounds twice will give you a watery, flavorless, or bitter coffee. However, the results may differ depending on your brewing method.

Out of the four methods, French Press gave us the best results. But keep reading if you’d like to learn more about our process and what we learned.

Can I Use Moka Pot Coffee Grounds Twice?

After trying it ourselves, we do not recommend brewing the same coffee grounds twice in a Moka Pot.

Moka Pots use up to two bars of pressure to extract most of the flavor compounds from coffee beans. Because of this, there won’t be much left to extract during a second brew.

How We Tested The Moka Pot

We then brewed Moka Pot coffee by filling the filter basket with coffee grinds and filling the bottom chamber with water up to the safety valve. Once the first brew was complete, we refilled the Moka Pot with water and brewed a second batch without replacing the coffee grounds.

Our Results Using The Moka Pot

After using our Moka Pot grounds twice, the second brew looked like tea and tasted like water. This was not surprising considering how much coffee was extracted the first time.

There was a slight color to the second brew, but the liquid was still clear and transparent. And there was no flavor to speak of.

So, we would not recommend brewing coffee grounds twice in a Moka Pot.

Can You Use Coffee Grounds Twice – French Press

In general, you shouldn’t use coffee grounds twice, but if you really wanted to try it, the French Press will give you the best results.

How We Tested The French Press

To test this, we took our Mueller French Press and Chock Full o’Nuts Coffee (both are available on Amazon).

We brewed the French Press coffee for 4 minutes using 2 tablespoons of coffee and 6 oz of hot water. Once the first brew was complete, we poured another 6 oz of fresh hot water over the used grounds and let it brew for another 4 minutes.

Our Results Using The French Press

The second brew was more watery than the first brew, but it still had some coffee flavor to it.

Since French Presses use coarse grinds, flavors aren’t extracted from the beans very quickly. This is why the bean still has additional flavors available for the second brew. Also, since the beans are immersed in the water, the liquid retained a lot of flavor during both brews.

One other thing we noticed was that even though we used 6 oz of water each time, the second brew resulted in more coffee.

This happened because the beans absorbed a lot of water during the first brew. However, during the second brew, they were unable to retain much of the water.

If you like weaker coffee, you might want to try using coffee grounds twice in your French Press.

Can I Use Espresso Coffee Grounds Twice?

We don’t recommend using coffee grounds twice in an espresso machine. The resulting coffee would be extremely bitter and barely drinkable.

There is a version of the espresso called a lungo. This version uses more water than the normal espresso, but brewing a lungo is very different from brewing coffee grounds twice.

For starters, a lungo will contain all of the coffee’s acids, oils, and sugars as well as some bitter notes. By comparison, a completely second brew won’t contain any of these good flavor compounds and will simply taste bitter.

How We Tested Espresso

To try this out, we used our Breville Barista Express. (If you’re in the market for an espresso machine, I’d highly recommend taking a look at the Barista Express on Amazon.)

We ground fresh coffee beans and brewed a single-shot espresso. We then used the same grounds to brew a second shot of espresso.

Our Results Using The Espresso Machine

During our first brew, we got a robust, concentrated coffee with a gold crema on top.

By comparison, the second brew had something like froth instead of crema, it wasn’t as rich and it was extremely bitter.

Keep in mind that during coffee extraction, acids are extracted first, then fats and sugars, then finally the plant fibers break down which have a bitter flavor. After the first espresso, most of these flavor compounds are already pulled out.

So, when we brewed our second espresso shot with the same beans, we got a bitter espresso.

We definitely don’t recommend this one.

Can I Use Pour Over Coffee Grounds Twice?

We don’t recommend using the same coffee grounds twice in your pour-over maker. You’ll end up with a very watery coffee that has a negligible amount of flavor.

How We Tested The Pour Over

We used our Breville Barista Express to grind our coffee beans and then brewed those grinds twice in our Bodum Pour Over Coffee Maker (links go to Amazon.)

Each brew used 2 tablespoons of grinds and 6 oz of hot water.

Our Results Using The Pour Over

The second brew did have flavor, but it was more like a coffee-flavored tea than real coffee.

Pour-over brewers don’t use pressure like Moka Pots or Espresso Machines, and they aren’t immersion brewers like the French Press. Instead, they use gravity to pull the water through the coffee grinds.

This creates two issues. First, because pour-overs only use gravity, their grinds still contain a great deal of flavor, even after the first brew. However, because they use gravity, they’re not able to extract a lot of that flavor even during the second brew.

Although we do believe used beans have the potential for more extraction, we don’t believe that pour-over brewers can pull out as much flavor as other brewing methods.

Can I Use Cold Brew Coffee Grounds Twice?

Technically, coffee grounds that were used for cold brew coffee can be brewed again.

However, keep in mind that cold brew typically steeps for hours. So, a significant amount of the bean’s oils, sugars, and acids are extracted and the resulting coffee is very concentrated.

This means there won’t be very many flavor compounds left after the first brew, and your second batch of cold brew will lack flavor and have a very light mouthfeel.

Can I Use K-Cup Coffee Twice?

K-cups are designed to only be used once. And while you can technically use a K-cup twice, your second cup of coffee will be inferior to the first.

So, if you tried to brew it twice, you’d get a very weak and subtle coffee with a tea-like quality.

It definitely won’t taste like the coffee you’re used to, but it could be drinkable with the addition of sugar and cream.

How Much Caffeine Will I Get By Using Coffee Grounds Twice?

If you brew your coffee grounds twice, you may get between 1 and 5 mg of caffeine for every gram of coffee grounds. However, since this depends on the beans you use and your coffee brewing method, it’s difficult to know for certain.

According to the Journal of Agricultural and Food Chemistry, most coffees contain between 10 and 12 mg of caffeine per gram of coffee. The same journal also published a study showing that used coffee grounds have a coffee concentration of anywhere from 3.59 to 8.09 mg/g.

So, based on these studies between 1/3 and 2/3 of the bean’s caffeine is extracted during the first brew.

Assuming that the same ratio of caffeine is extracted during the second brew, you can expect your second coffee to contain between 1 and 5 mg of caffeine for each gram of coffee grinds.

How Many Times Can I Reuse Coffee Grounds?

As a general rule, you should only use coffee grounds one time. If you brewed coffee a second time, it wouldn’t be anything like the coffee you’re used to.

Instead, it would be more like a tea pretending to be coffee. It would lack flavor and mouthfeel and could be much more bitter. However, it would contain a decent amount of caffeine.