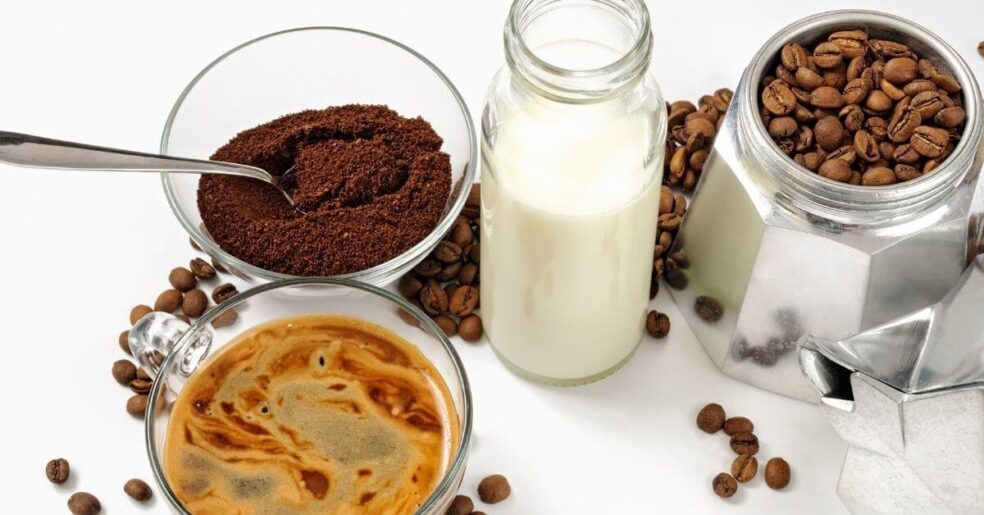 Milk is commonly added to Moka Pot coffee, but having to prepare milk in a separate container requires additional time and extra cleanup. This drawback leads many people to wonder can you use milk in a Moka Pot.

As a general rule, milk should not be used in a Moka Pot. Since a Moka Pot is exposed to constant heat, any milk added to the bottom chamber will quickly curdle, burn, and leave residue throughout the Moka Pot. Adding milk to the top chamber won’t damage the Moka Pot, but has several drawbacks as well.

If you want to know more about the best way to prepare milk for your Moka Pot coffee then keep reading!

Can You Brew Moka Pot Cofee With Milk Instead Of Water?

Brewing Moka Pot coffee with milk instead of water is a bad idea for several reasons.

Let’s quickly go through them one by one.

Brewing Moka Pot Coffee With Milk Will Burn The Milk

Consider that when making Moka Pot coffee, your brewer’s bottom chamber is placed directly on top of a heat source.

Also, Moka Pots are typically made of aluminum or stainless steel. Both these metals will get hot enough to burn the milk well before the coffee begins to brew.

Milk Residue Will Be Left Throughout The Moka Pot

Moka Pots use vapor pressure to push hot water from the bottom chamber up into the funnel, through the filter, and into the top chamber.

When you replace hot water with milk, the burnt milk fats and lactose will travel through the funnel and filter and remain stuck to every part of the Moka Pot. And if you don’t clean the pot thoroughly after every brew, it’ll be very easy for mold to grow.

You may have heard that hard water isn’t ideal for brewing coffee. This is because it contains calcium or magnesium which can interfere with coffee extraction and affect flavor.

Well, milk also contains calcium and magnesium along with fats, sugars, and other elements. These particles give milk its flavor but also affect how much coffee can be extracted.

Using Milk Will Increase The Pressure In The Moka Pot

Because milk contains several components it’s thicker and creamier than water. Trying to brew Moka Pot coffee with a thicker liquid will increase the pressure generated while brewing.

This increase may or may not be within acceptable limits for your Moka Pot. If not, there’s the potential for your pot to explode. (To learn more about this check out our post “Can A Moka Pot Explode“)

Can You Put Milk In A Moka Pot’s Top Chamber?

You can add milk to the Moka Pot’s top chamber. Doing so won’t hurt your Moka Pot or create any serious problems with your coffee, but there are a few issues I ran into while doing this.

People typically add milk to Moka Pot coffee when they want to make a latte, cappuccino, or Cafe con Leche. But keep in mind that each of these drinks contains more milk than coffee.

Now consider that Moka Pots are supposed to be used at full capacity. So, there will be very little space left in the Moka Pot after your coffee is brewed. (To read more about Moka Pot capacity, read “Can You Half Fill A Moka Pot“)

If you add milk to your Moka Pot, it will get hot and mix with the coffee. But the resulting coffee won’t be anything like a latte, cappuccino, or Cafe con Leche.

Instead, you’ll have a very strong and bitter coffee that’s creamy, and only slightly milky.

In the end, you’ll probably need to add more milk to the coffee, so the best option is to prepare it separately from the beginning.

Sediment From The Moka Pot Will Be In Your Coffee

A common issue with Moka Pots is that sediment ends up in the coffee. This sludge has a very bitter taste and people avoid it by leaving the last bit of coffee in their Moka Pot.

But when you add milk to your Moka Pot this sediment is integrated with the coffee and can’t really be avoided. As a result, your coffee will have a bitter taste to it.

(To read more about avoiding Moka Pot sediment check out “How To Reduce Sediment In Moka Pot Coffee“.)

Milk Will Scald In The Top Chamber

Adding milk to your Moka Pot will result in milk residue being stuck to the chamber.

This by itself isn’t a huge issue, but it will require you to thoroughly clean your Moka Pot’s top chamber after every brew.

Since aluminum is a very good heat conductor, the body of the Moka Pot will get hot much faster than the water inside the pot.

So, any milk added to the chamber will be exposed to hot metal for several minutes while the Moka Pot’s pressure is building.

Not only will this cause the milk to scald and stick to the pot, but it’ll significantly change the milk’s flavor.

Are There Any Moka Pots Designed To Use Milk?

While the classic version of the Moka Pot is not designed for milk, Bialetti has created two Moka Pots that can use milk.

(The Mukka Express is available on Amazon, but at the time of writing, the Kremina was not available.)

Bialetti’s Mukka Express works almost exactly like their classic Moka Pot. The difference is that you’re supposed to add milk to the top chamber before brewing the coffee.

This coffee maker also has a pressure valve in the top chamber that releases steam once enough pressure builds up. This will mix the milk and coffee together while steaming the milk at the same time.

The Mukka Express is definitely worth checking out if you’re really interested in having a Moka Pot that can make lattes.

At the time of writing, the Bialetti Kremina wasn’t available on Amazon, but you may be able to find it in a local store or on other sites like eBay.

The Kremina brews coffee like a normal Moka Pot, however, its top chamber contains something similar to a french press plunger.

You put milk in the chamber before brewing and after the coffee is done, you’ll need to pull and push the plunger rapidly. This results in a frothy, milky coffee.

Can You Steam or Froth Milk In A Moka Pot?

However, the Mukka Express and Bialetti Kremina can incorporate air.

The Mukka Express has a pressure gauge that forces steam into the milk. But this is done automatically, so the steamed milk won’t have the same velvety texture you’ll get with an espresso machine.

(The espresso machine we use to steam our milk is the Breville Barista Express.)

The Bialetti Kremina doesn’t use steam. Instead, it uses a mesh filter similar to a french press plunger which results in frothed milk.

How To Make A Latte With A Moka Pot?

There are two main ways to make a latte with a Moka Pot.

If you want to prepare the latte in the Moka Pot, you’ll need to pick up a Mukka Express from Amazon or a local store. Any other Moka Pots won’t be able to steam the milk.

The second option is to make the Moka Pot coffee and steam the milk separately. Creating true steamed milk is difficult without an actual espresso machine, but frothed milk often serves as a good substitute.

Personally, we use a handheld whisk whenever we need to froth milk. (Check out the FrothBlask Milk Frother on Amazon.)