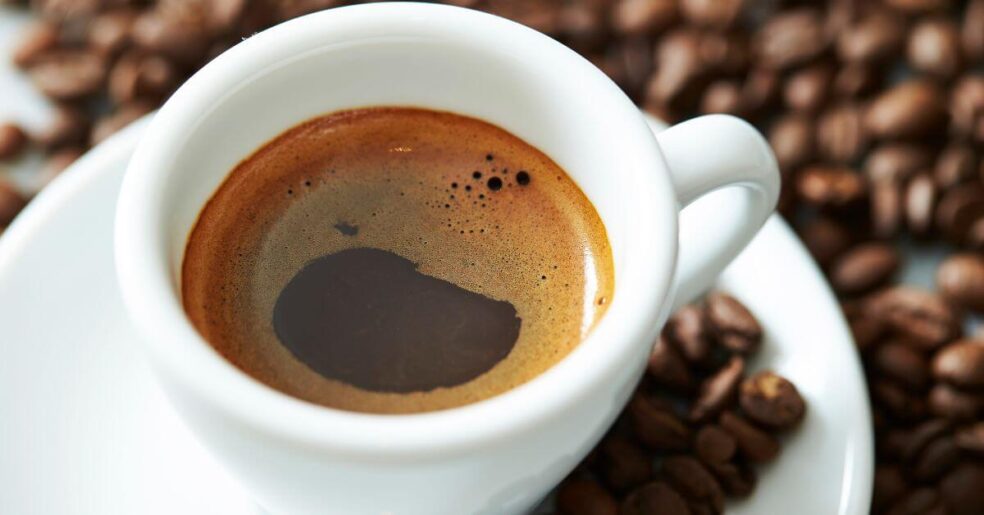 There are so many espresso-based drinks nowadays that it can be confusing to tell them apart. There’s espresso, espresso macchiato, latte, etc. Some contain milk and some don’t, but does espresso have milk or not?

Espresso does not contain any milk. Instead, espresso is a pure, concentrated coffee that’s made by forcing a small amount of water through ground coffee beans under high pressure. Milk can be added to espresso to prepare coffee-based drinks, but if milk is added it’s no longer considered espresso.

While espresso is a pure, concentrated coffee, it’s often used as the basis of many coffee drinks containing milk.

Keep reading if you want to learn more about espresso and what happens when you add milk to it.

Does Espresso Have Milk In It?

Espresso does not contain any milk.

However, it’s understandable how some people might have this question. A cup of coffee is called “coffee” whether it has milk added or not, so wouldn’t the same be true for espresso?

It’s a good question, but unlike the general term “coffee”, espresso refers to a specific type of coffee that’s prepared in a certain way. And if milk is added to it it’s no longer considered an espresso.

Let’s quickly discuss what an espresso is to see why this is the case.

What Is An Espresso?

According to the Specialty Coffee Association, espresso is a drink that’s made by forcing hot water through coffee grinds under pressure.

(This is actually a simplified definition. The Specialty Coffee Association’s definition includes the amount of water and coffee grounds to be used, the water’s temperature, the bars of pressure needed, and even the brew time.)

While the Coffee Association’s definition is very technical and developed, it’s not very different from the original meaning of espresso.

The word “espresso” literally means “expressed” or “squeezed out”. It’s called that because it’s made by squeezing hot water through finely-ground coffee.

So, as we can see, espresso simply refers to a specific method of coffee preparation.

Why Do People Add Milk To Espresso?

Milk is typically added to espresso to reduce the strength and bitterness of the drink.

Since espresso is made by forcing hot water through coffee grinds under pressure, the result is a highly concentrated and robust coffee. And while this drink is loved by many people, others find it too strong and bitter to be drunk plain.

This is why milk is often added to espresso.

Not only does milk mellow out the bitterness, but it adds a rich flavor, creamy texture, and sweetness that makes it the most popular espresso additive.

What Is An Espresso With Milk Called?

Espresso with milk goes by many names – latte, cappuccino, macchiato, cortado, etc. However, once milk is added to espresso, the beverage is not typically called espresso.

Many coffees get their name from Italian words. And the names aren’t arbitrary. Instead, they describe what’s being done to the coffee or its appearance.

For example, espresso refers to the process of squeezing or forcing water through coffee grinds. But let’s talk about a few other espresso drinks to see what we mean.

Latte is Italian for milk. It’s called this because it’s a drink that’s mostly milk.

A latte starts with a single or double shot of espresso that has several ounces of steamed milk added for flavor and texture.

Macchiato means “spotted”, “stained” or “marked”. It’s called this because a small amount of milk is added to the espresso and it appears to be marked with a white spot.

A macchiato starts with a single or double shot of espresso and adds just enough milk to reduce some of its strength.

A cortado is similar to a macchiato, however, it contains a bit more milk. Cortado means “cut” and refers to the fact that the espresso’s strength is being cut by adding milk.

A cappuccino gets its name from the Capuchin friars. When milk is added to espresso to make a cappuccino, its brown color is similar to the robes these friars wear.

Unlike the previous espresso-based drinks, cappuccino is made with espresso, steamed milk, and milk foam.

What Kind Of Milk Can I Put In An Espresso?

Typical cow’s milk is most often used because its fat, sugar, and protein content give it a creaminess and sweetness that matches extremely well with espresso.

But if you don’t consume cow’s milk any plant-based or other animal-based milk will work. While some of these milks may not steam or froth as well as dairy, there are several that do work quite well.

If you want to read more about which milk to put in your espresso we’ve got a whole post on it! Check out “What Milk Froths Best?“

Nowadays, there are plenty of coffee shops like Starbucks that use espresso as the basis for many of their drinks.

These drinks are given some version of the name latte or macchiato although they’re very different from the original drink.

It’s the popularity of these and other drinks that may have created confusion as to whether espresso contains milk.

While we can definitively say that espresso does not have milk, most coffee drinks do combine milk with espresso.