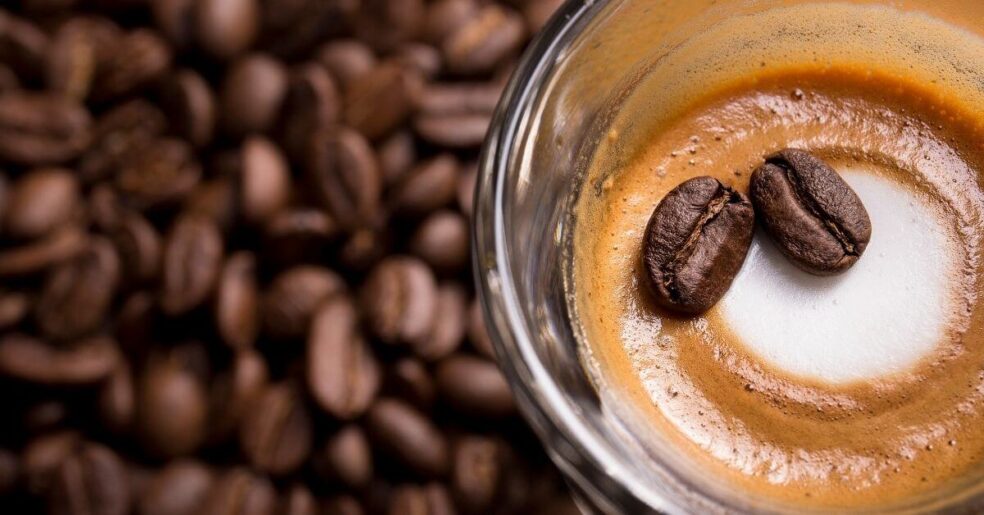 There are so many varieties of coffee thanks to the inventiveness of baristas. And knowing what to expect just from its name alone may be difficult. For example, Starbuck’s Caramel Macchiato is one of their most popular drinks. But what is a macchiato?

What can be even harder is identifying a cup of coffee from its taste and texture. Since many coffee drinks are some combination of milk and coffee, different beverages may seem like the same thing to the casual coffee drinker.

And, while it’s easy to tell a shot of espresso from a latte, a macchiato is less recognizable.

But don’t worry! By the end of this post, you’ll be an expert on macchiatos. In this post we’ll talk about:

What Is A Macchiato?

Macchiato is the Italian word for “marked”. It’s called that because a macchiato is a shot of espresso that’s been marked with a bit of foamed milk.

Macchiatos are also called, espresso macchiato or caffè macchiato. It’s important to note that macchiato isn’t a watered-down version of espresso. It’s a modified drink for people that want an espresso with less intense flavor.

Who Invented The Macchiato?

Espresso lovers believe that the macchiato came into existence in Italy in the 1980s as a subtle variation of the espresso.

Back then, just a dab of milk would turn the classic espresso into a caffè macchiato.

Moreover, as it doesn’t have a consistent recipe, many people have a hard time recognizing a macchiato drink.

That’s exactly the reason why you may see different variations of macchiato in coffee shops.

Moreover, these variations depend on the ratio of espresso to milk.

Who Is A Macchiato Ideal For?

Macchiatos are ideal for people who like espresso but want their drink to be less intense. It’s also great for coffee drinkers that don’t want too much milk in their coffee drink.

The traditional caffè macchiato or espresso macchiato tastes almost like a shot of espresso. However, there is a subtle difference between a macchiato and an espresso. A macchiato can be a little less bitter than an espresso thanks to the tiny amount of hot milk in it.

Variations On The Macchiato

The classic macchiato doesn’t have a universally consistent recipe. So, depending on which coffee shops you visit, your macchiatos may not look the same.

Besides that, a chain coffee shop may have its own proprietary espresso drinks.

Let’s go through a few of the more standard variations you’ll come across.

Caffè macchiato is the traditional form of macchiato. The history of macchiato tells us that the drink came into being as a less intense variation of the classic espresso.

To accomplish this, the barista would drop a small amount of frothed milk into the espresso and turn it into a marked coffee.

This preparation method is also reflected in the name café pingado, which is Portuguese for coffee with a drop of milk in it.

Latte means milk in Italian. So a latte macchiato is literally stained milk.

While a standard macchiato is an espresso with a small amount of milk, a latte macchiato is mostly hot milk with a bit of espresso poured in.

The latte macchiato is a little milkier than its espresso counterpart. Instead of adding milk to espresso, you add an espresso shot to a cup of steamed milk.

Here is how you can create your own latte macchiatos.

The first thing a barista would do is warm up half a cup of steamed milk. Next, he or she pours an espresso in that milk very slowly.

Most experts pour the espresso shot in the center that creates a dot (stain) in the steamed milk. And this pouring method is what makes a latte macchiato appear in its signature look.

This variation of the macchiato is the brainchild of a creative Starbucks employee. And while this coffee beverage may not look anything like a standard macchiato, it is extremely popular.

Caramel macchiatos are essentially made from four ingredients.

With the end result being something like a very sweet latte macchiato.

So, what’s different between a long and short macchiato? Well, there is none as far as the recipe is concerned. The only difference lies, as the names suggest, in the size of the drink.

The name tells it all; a short macchiato is served in a miniature glass or an espresso cup, which makes it look artistic.

It just has a single shot of espresso, with a layered foam and some added milk.

On the other hand, a long macchiato is a double shot of espresso with a bit of steamed milk added. It’s often served in a tall glass.

Latte vs Cappuccino vs Macchiato

Thanks to the creativity of baristas and the general love of coffee, there’s no shortage of espresso-based drinks out there (and latte art!).

The downside to this is that someone just entering the coffee world can easily get confused.

What’s The Difference Between Latte And Macchiato?

The difference between lattes and macchiatos lies in the amount of milk they contain and how the milk is prepared.

Both lattes and macchiatos contain espresso shots. But macchiato coffee contains a splash of milk; just enough to cut through the espresso’s intensity. And the milk is usually foamed.

On the other hand, a latte contains about twice as much milk as espresso. And it’s not foamed, it’s steamed, velvety milk that’s added to the latte.

Because of this, lattes have a less intense espresso flavor than macchiatos.

What’s The Difference Between Cappuccino And Macchiato?

Both cappuccinos and macchiatos are made with an espresso shot. However, a macchiato contains a little foamed milk, while a cappuccino is a layered drink that contains steamed and foamed milk.

As far as cappuccinos are concerned, it’s all about equal ratios. So, a barista would add equal parts espresso, steamed milk, and milk foam to make a cappuccino.

On the flip side, a macchiato has only two components; espresso and foamed milk. A major portion of a macchiato is espresso with a tiny addition of milk foam on the top.

As a result, a macchiato has a lot less milk than a cappuccino, which is exactly why they are stronger and come in smaller cups.

Cappuccinos are for you if you want a less intense more creamy coffee. Whereas, if you would prefer a stronger dose of caffeine, macchiatos are for you.

Is Starbucks Macchiato Really A Macchiato?

Yes and No. Starbucks does sell espresso macchiato, which are the traditional macchiatos you’d expect. But Starbucks also sells its famous Caramel Macchiato which is more like a latte with caramel and vanilla syrup added.

Unlike the traditional macchiato, which contains a tiny amount of milk, Starbucks’ macchiato variation is a lot more milky and sweet.

Starbucks doesn’t stop there though; they add a top layer of hazelnut or caramel as well.

Where Are Macchiatos Most Popular?

Macchiatos are most popular in Italy where they are served in almost every coffee shop. The drink is often consumed by Italians in the daytime because of its rich taste and creaminess.

Such espresso-based drinks have good cultural value in Italy. And, although you can order an espresso macchiato in the morning, you might get a few stares in Italy.

That is because an espresso macchiato is more like an afternoon drink in the country.

How To Make A Macchiato At Home?

The process to make an espresso macchiato at home is very simple.

This is what you’ll need:

Your espresso will be best if you use fresh coffee beans and grind them right before brewing. You’ll want to get espresso roast beans (which is a dark roast) and grind them fine.

It’s best to do this with an espresso machine, but if you don’t have a machine, you can use a manual espresso maker, Moka pot, an Aeropress, or just a cup of strong coffee.

There are several ways you could brew it, but whatever you choose, follow your brewer’s instructions and pour about 2 oz of prepared coffee into your espresso cup.

Whole milk is the best option for steaming or frothing because it contains fat and protein. Protein is awesome for making those bubbles and cream gives you a velvety texture.

But of course, if you want to use plant milk, that’ll work too!

If you’ve got an espresso machine you can make make a tiny bit of steamed milk with the steaming wand. If you don’t have a steaming wand, you can froth your milk by heating it up and agitating it.

Add The Milk To The Espresso

After you’ve got your milk, simply grab a spoonful of milk foam and drop it right on top of your espresso. And that’s it! You’ve got your own homemade espresso macchiato!

In a traditional coffee shop, when you order a “macchiato”, you will probably get the espresso macchiato.

Whereas, if you order a macchiato at a coffee chain like Starbucks, you will likely get a latte macchiato.

So, if how do you order these drinks will depend on the shop?

Well, before you visit a coffee chain, take a look at their menu to see if they have a special name for the drink you want. Starbucks for example refers to a regular macchiato as an “espresso macchiato”

Is A Macchiato Stronger Than Coffee?

Yes, a macchiato is stronger than most other coffee drinks except a straight espresso.

What Makes A Macchiato Different From Coffee?

Macchiatos are espressos with a splash of milk added. And the main difference between espresso and coffee is the intensity and richness of the drink.

Espresso is a type of concentrated coffee that’s been extracted under high pressure. This gives it a strong and rich flavor. Coffee, on the other hand, is less intense because it’s brewed under low pressure.

What Is Macchiato Flavor?

Starbucks’ version of the macchiato has flavors of caramel and vanilla added.

However, macchiato itself doesn’t refer to a flavor. Traditional macchiatos are regular espressos that have been made less intense by the addition of milk.

The Bottom Line: What Is A Macchiato?

If you love espressos but find them a bit too intense, then the macchiato may be for you.

There are several variations on this famous Italian drink, including latte macchiatos, long macchiatos, and Starbucks’ ever-popular versions.

And no matter which one you love, it’s surprisingly easy to make it in your own home with just a few basic ingredients.

Tell us your favorite type of macchiato in the comments below!