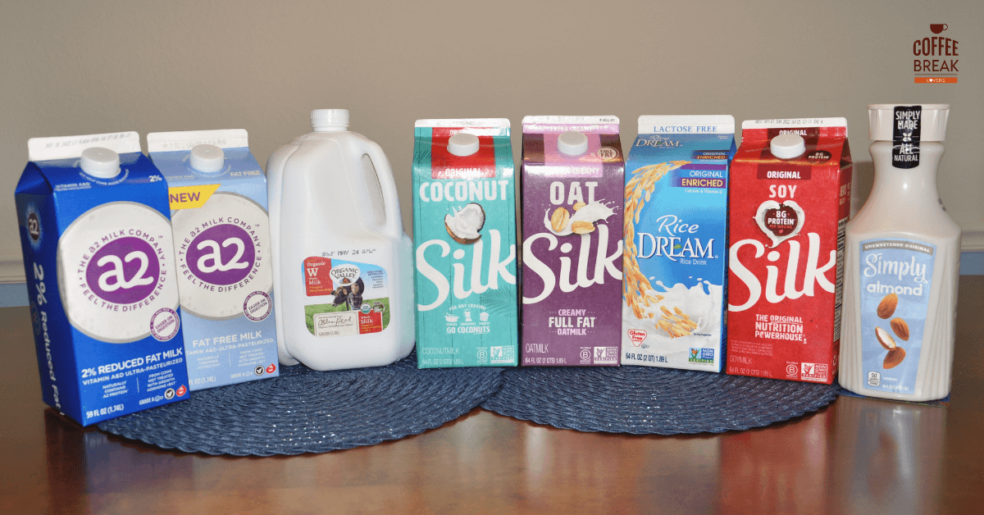 When it comes to lattes and cappuccinos, frothed milk is important. But there are so many kinds of milk out there you may be wondering what milk froths best?

In general, skim milk creates the best froth out of the dairy milks, and almond milk froths best when it comes to plant-based milks. Their frothing ability is determined mostly by their protein and fat content. While these milks do create a light and airy froth, it’s also dry and lacks creaminess.

Even though skim milk and almond milk create amazing froth, lightness and airiness aren’t the only important factors. Texture, creaminess, and taste also affect the quality of your froth and the ultimate quality of your coffee.

So, to figure out what milk froths best, we tested several different kinds on a number of factors.

Read on to find out which milk was truly the best!

In terms of pure frothing ability skim milk and almond milk are the best. However, when taking into account as well as texture and creaminess, whole milk and coconut milks were the best overall.

Since non-dairy milks have been growing in popularity, we’ve separated the dairy and plant-based options and summarized the qualities of the different milks.

Whole milk also has a richer and fuller taste that adds creaminess to your coffee without overpowering the bean’s natural flavor.

Because of its frothing ability, texture, and taste, whole milk created the best quality froth.

Similar to whole milk, 2% milk has a high protein content. However, it has a lower fat content. This means that 2% milk froth will froth easier and have a lighter, dryer texture.

While the froth is thicker and larger, the taste of 2% milk is more watery than whole milk so your coffee won’t taste as rich.

However, if you want a thick, airy foam that’s not as watery as you’d get with skim milk. Reduced-fat milk is a good choice.

Skim milk created the largest amount of foam, however, it was the dryest of all the dairy milks.

After frothing the milk we tried pouring it into our coffee, but the froth was so thick it stuck to the cup. Instead, the liquid portion of the milk poured out.

To add the frothed skim milk to our coffee, we needed to use a spoon.

So, even though skim milk makes the thickest and airiest froth, the fact that it’s not creamy or pourable drops the quality a bit.

Also, the taste of skim milk is extremely watery, so it didn’t add much richness or flavor to the coffee.

If you only care about the size and shape of your froth skim milk is a good choice. But if you prefer a rich, dense, and creamy froth, whole milk is best.

Almond milk creates the largest and thickest froth. However, when taking into account frothing ability, creaminess, and texture, coconut milk was the best overall.

The plant-based milks were more difficult to judge because they each have their own unique flavor and we all have our preferences.

To minimize our taste bias, we tried to focus mostly on the froth’s size, texture, and durability. But we did note how prominent the milk’s flavor was when added to the coffee.

Check out a summary of our results in the table below.

Because of its high-fat content, coconut milk created a dense and creamy froth that was somewhat similar to whole milk.

Coconut milk created the highest quality froth and its unique flavor was noticeable but did not overpower the coffee.

Based on our experience, coconut milk makes the highest quality froth out of all the non-dairy milks.

Even though it wasn’t the frothiest, oat milk was one of my favorites because it had the subtlest flavor and had the least impact on the coffee’s taste. (The brand we used here was Silk Oat Milk – Extra Creamy)

Rice has no protein and very little fat, so it didn’t create any real froth.

There were some small bubbles created, due to the movement of the milk, but they quickly disappeared and didn’t add any texture to the coffee.

Also, the rice milk we purchased (Rice Dream) had a dominant taste that detracted from the coffee’s flavor profile.

Because of its inability to foam, I wouldn’t recommend rice milk for frothing.

Out of all the plant-based milks, almond milk created the most froth. It was a thick and dry froth which we found surprising considering it has more fat than protein.

Similar to skim milk, almond milk froth did not pour easily. Instead, only the liquid portion of the milk was poured while the froth remained in the cup.

In the end, we needed to spoon the froth into our coffee.

The almond milk froth remained very stable and showed no signs of breaking apart. However, we felt that the flavor of the milk (our brand was Simply Almond) overpowered the coffee way too much.

If you only care about the size and shape of the froth, almond milk is a good choice.

Soy milk also didn’t make a great froth. The bubbles were large but there were very few of them and overall the foam was very weak and transparent.

The froth survived being poured into the coffee. However, over time the foam became weaker and I believe it would have eventually disappeared completely.

The taste of soy milk also had a strong effect on the flavor of our coffee.

Because of how it froths and how its flavor affects the coffee, I wouldn’t recommend soy milk for frothing.

How To Froth Milk?

As a general rule, the process of frothing milk requires heat and agitation. A common method of frothing milk is to heat it in the microwave to a temperature of around 140 to 150ºF (60-65ºC) and then agitate it with a handheld electric whisk.

However, not everyone has an electric whisk and there are several other ways to froth milk including:

Let’s briefly talk about each method to see how they work.

You Can Froth Milk With An Electric Whisk

A handheld electric whisk is a battery-powered wand that vibrates at the push of a button. Our whisk, that we used in the images above is the FrothBlast Electric Whisk.

The benefits of electric whisks are that they’re

If you want to froth your milk without the long cleanup, I’d definitely go with an electric whisk.

Use a French Press

A French Press can froth milk amazingly well. In fact, it’s what I used most often before we bought our electric whisk.

To use this method, heat your milk up and pour it into the french press. (Make sure you have enough milk to cover the filter). Pull and push the plunger vigorously and you’ll have a thick foam within seconds.

Use a Milk Frother Machine

These machines are usually the size of a kettle or large coffee grinder, so they do take up some kitchen space. But the advantage here is that most models can produce various textures of foamed milk.

For example, the Secura Milk Frother( you can see it on Amazon) makes cold or hot milk froth for cappuccinos. It also heats the milk so you don’t have to do it yourself in the microwave or on the stove.

Use a Shaker Bottle or Sealed Container

If you don’t want to buy a special machine to froth your milk, that’s ok! As long as you’ve got a shaker bottle or mason jar,( see it on Amazon) you can froth your milk.

This is how to do it – warm your milk, pour it into your bottle or mason jar, and shake until you’ve introduced enough air.

Keep in mind, that the froth might not be super aerated as you’d get with a french press or electric whisk, but it’ll get the job done.

Why Won’t My Milk Froth?

In general, older milk is less likely to froth. So, if you’re doing everything right but your milk just won’t froth, it’s most likely because your milk is too old.

The reason is that fresh, whole milk is full of triglycerides, which are made up of glycerol and fatty acids. As the milk ages, the triglycerides break down and the glycerol goes rogue.

It’s this glycerol that is responsible for weakening the bubbles. So, more glycerol means less stable foam.

This is why fresh milk is best for frothing!

Why Does Milk Foam or Froth?

Milk froth is a product of heat and agitation. Heat causes the milk’s proteins to unwind and form spheres. Agitation introduces air into the milk. When those two factors are combined, the milk proteins will form spheres around the air, creating foam bubbles.

How Hot Should Milk Be To Froth?

When milk is too cold, the proteins are balled into little bundles. So they won’t unfold into the spheres required for froth.

On the other hand, if your milk gets too hot, the proteins will break down completely and that won’t froth either.

How Does Milk Fat Affect Froth?

In general, fat prevents froth bubbles from getting too big. So, the more fat your milk contains, the smaller and creamier the foam tends to be.

Why does it work like this? Well, without getting too technical, remember those protein spheres that build the milk froth?

One end of the sphere is hydrophobic (repelled by water). The other end is hydrophilic (attracted to water).

The end that’s repelled by water will grab hold of air or fat (whichever’s available).

If there’s no fat, the proteins grab nothing but air, which means bigger bubbles.

If there is fat available, the proteins will grab onto both fat and air. This means smaller air bubbles, but a creamier foam texture.