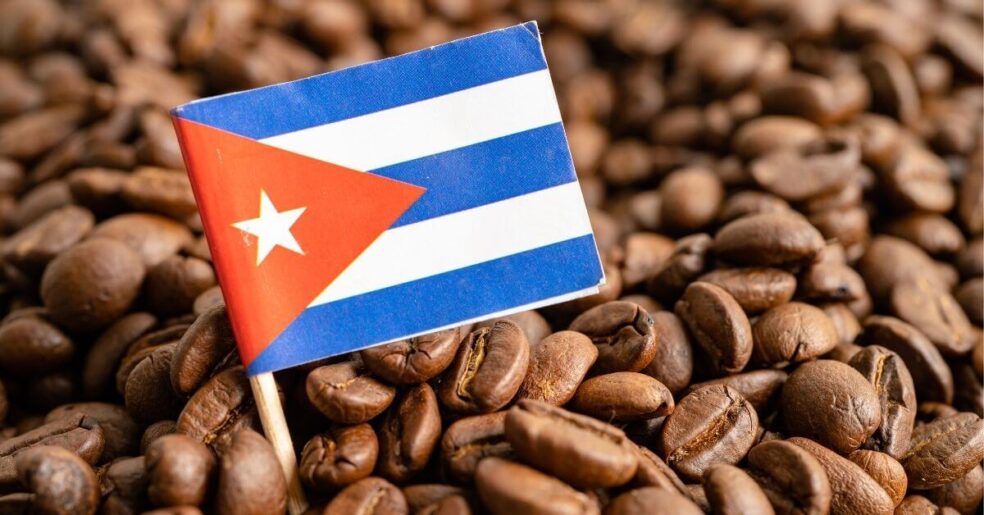 Perhaps you’re considering whether to give Cuban-style coffee a try. But you’re not quite sure what makes Cuban coffee different?

In general, Cuban coffee is sweeter, thicker, and more energizing than other types of coffee. Cuban coffee is traditionally brewed in Moka Pots which gives it a robust, espresso-like quality. But the addition of demerara sugar adds sweetness, flavor, and a syrupy texture that other coffees lack.

While all Cuban coffees share these basic characteristics, there are noticeable differences between preparation methods, brands, and whether the coffee was produced in the U.S. or Cuba.

If you want to learn more about what makes Cuban coffee so special, keep reading!

Interested in Making Cuban Coffee at Home? We recommend Pilon coffee and the Bialetti Moka Pot for brewing Cuban-style coffee. Both are available on Amazon.

A cup of Cuban coffee has several characteristics that make it unique, such as its preparation method, strength, and sweetness. (Check out our article: Cuban Coffee Brands – The Best Beans For The Authentic Flavor!)

Let’s go through these one at a time to see exactly how Cuban coffee compares to espresso, French Press, and other types of coffee.

Moka Pots are the primary brewers found in Cuba. So, as a matter of tradition, wherever in the world Cuban coffee is made, you can expect it to be done with a Moka Pot. (We use a Bialetti Moka Pot that’s available on Amazon.)

While this by itself may not seem very special, Cuban coffee really differentiates itself with its use of sugar.

At times, brown demerara sugar ( check on Amazon) will be added to Cuban coffee until it’s very sweet and has an almost syrupy texture. Alternatively, white sugar will be used to make espumita or sugar froth.

Here, a bit of unsweetened coffee is whisked with white sugar to make a thick paste. The remainder of the coffee is then poured over the paste which results in a crema-like foam on top.

Best Cuban Coffees You Can Try!

Cuban Coffee Is Twice As Strong As Regular Coffee

A cup of Cuban coffee is twice as strong as French Press, pour-over, or drip coffee.

By strength, we mean the total dissolved coffee solids that are extracted into the cup. These solids are made of oils, acids, and sugars that contribute flavor to your final cup of coffee.

Part of the reason for this strength is that Cuban coffee is typically a dark espresso roast. It’s easier to extract solids from dark roasts and they’re known for the smoky and bitter notes that are often associated with robustness.

Another reason Cuban coffee is strong is because it’s brewed with Moka Pots. (check this one on Amazon)

These brewers use pressure to extract more coffee flavor than all other coffee makers (except espresso machines).

(If you want to read more about how strong Cuban coffee is, we’ve written a whole post on it! Check out “Is Cuban Coffee Stronger Than Regular Coffee“.)

Cuban coffee is extremely dark compared to coffee brewed with a French Press, pour-over, or drip machine. It has this color because it’s made with dark roast coffee and is brewed with a high level of extraction.

This level of extraction also gives Cuban coffee a smoky bitterness that can be overpowering until the sugar is added. But once you’ve sweetened it, it’s very well balanced.

Also, because Cuban coffee is made from dark roast beans, you won’t taste any of the bean’s natural flavors. Instead, the only flavors that come through are the smoky, roast flavors.

So, just keep in mind that Cuban coffee isn’t for people looking to taste the bean’s natural flavors.

Cuban Coffee Has A Social Aspect

One important characteristic that makes Cuban coffee different is its social component. At its core, Cuban coffee isn’t about brewing techniques or flavor profiles: it’s about hospitality and socializing.

Depending on the coffee culture in your country, coffee drinking may be a social activity or not. But wherever Cuban coffee is prepared, it’s typically done for guests, around meals, or with friends.

For example, a Colada is a popular Cuban coffee that contains around 10 to 12 ounces of coffee. The intent is to share the drink with a group of friends.

Cuban Coffee Has More Caffeine Than Other Coffees

Cuban coffee has significantly more caffeine than other coffees besides espresso.

This extra caffeine will give you an energy boost that you’ll definitely notice after just one cup.

Another difference between Cuban coffees and others is the roasting process.

Most Cuban coffee brands use a precise blend of Robusta and Arabica beans and roast them using a secret roasting formula.

For example, the founder of Pilon coffee developed his own coffee roasting formula in Cuba. And when he came to the U.S. he brought his secret formula with him and used it to make Pilon. (Read about Pilon’s story on their website.)

The traditional roasting techniques for Pilon and other brands are another reason Cuban coffee is so unique.

What Makes Cuban Coffee Beans Different From Other Coffees

There are some huge similarities between both types of Cuban coffee, but there are some important differences as well.

Let’s quickly discuss each one below.

How Is U.S. Produced Cuban Coffee Different From Other Coffees?

Cuban coffee produced in the U.S. has several differences from other coffees in American supermarkets.

Also, Cuban coffee found in the U.S. doesn’t come from Cuba. Instead, they’re a blend of beans from Central and South America.

While many other coffees are also blends, the difference here is that there’s no option to buy single-origin Cuban coffee as there is with other coffees.

Best Cuban Coffee You Can Try!

How Is Coffee Produced In Cuba Different?

However, Cuba also imports beans from Central and South America, so a lot of Cuban-produced coffee is blended as well.

Another huge difference between Cuban coffee and all other coffees is that it’s blended with peas.

The reason is that the Cuban coffee industry declined after the 1959 revolution. This resulted in the Cuban government mixing peas with coffee beans to stretch supplies. Coffee brewed with peas was thinner and more bitter (which is probably why Cuban coffee has a lot of added sugar).

In 2005, the Cuban government removed the peas from coffee, however, the peas were reintroduced in 2011 due to an economic downturn.

Cuban Coffee Is Difficult To Get

As we’ve seen, there are several similarities and differences between Cuban coffee and other coffees. But when it comes to coffee made in Cuba, one unavoidable difference is that it’s extremely difficult to get.

While most coffees can be found online, if not in a local store, Cuban coffee from Cuba is not imported into the U.S. In the last few years, the economic sanctions on the island were loosened which resulted in new coffee imports.

However, the sanctions were tightened again which made the coffee unavailable to U.S. markets.

This inability to buy Cuban coffee is, by far, the biggest difference between this coffee and others.

(If you want to read more about getting Cuban coffee, check out our post “Can You Buy Cuban Coffee In the US“)