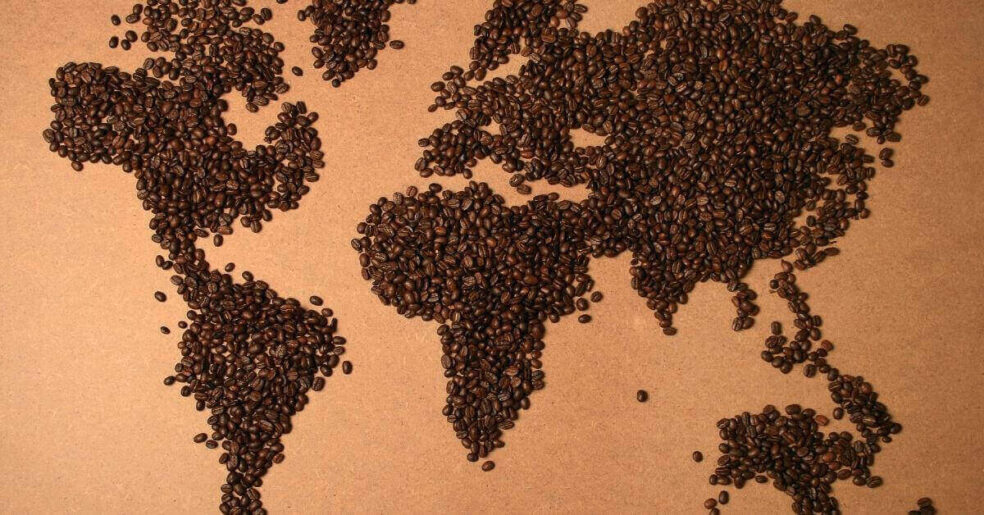 Would you believe that 2 million cups of coffee are drunk every day? It’s true. That’s a lot of coffee beans! But have you ever stopped to wonder where do coffee beans come from? Who brewed the first cup of joe? Or how many types of coffee there are?

If so, you’re in the right place!

In this post, we’re going to talk all about the origins of coffee and how it came to be the drink we know and love today. By the end, you’ll know

Consider this your complete guide to all things coffee! Let’s jump right in!

What Are Coffee Beans?

It turns out that coffee beans aren’t actually beans. They’re the seeds of a cherry-like fruit called coffee cherries.

Coffee cherries grow on coffee trees, which are tropical evergreen shrubs that thrive in specific regions.

Most coffee cherries contain two coffee seeds that press against each other as they grow. This pressing is why coffee seeds have one flat side and one rounded side.

However, around 5 percent of coffee cherries contain a single seed. In this case, the coffee bean is completely oval with no flat side. These completely round coffee seeds are called Peaberries.

Where Does Coffee Come From?

Coffee trees thrive in this region for a few reasons:

So, the answer to “where do coffee beans come from?” is 100% the Coffee Bean Belt!

Where Did Coffee Originate?

Today, coffee beans are grown all over the globe, but it’s widely acknowledged that the very first coffee plants originated in Ethiopia.

The story of how coffee beans were first turned into a drink is shrouded in mystery, but there is an Ethiopian origin story that’s commonly told.

Centuries ago, there was a goat herder named Kaldi who kept his goats near the coffee forests on the Ethiopian plateau. He noticed that after eating certain berries, the goats had so much energy that they wouldn’t sleep at night.

Kaldi, not knowing what to do, told the monks at a nearby monastery. The monks decided to try the berries themselves and made a drink out of them. The drink kept the monks awake and alert for long hours and from there the knowledge of this energizing fruit began to get around.

It didn’t take long for the knowledge of the energizing fruit to arrive in Arabia. And by the 16th century, coffee was being produced throughout the Middle East.

For religious regions, coffee was preferred to alcohol, which was forbidden. As the popularity of coffee grew, Sultans wanted to keep firm control of the drink and forbid the export of any coffee plant or coffee beans.

Despite the attempt to prevent it, smugglers eventually took coffee to Europe where the “wine of Araby” became even more popular.

How Did Coffee Become Popular?

By the 17th century, coffee had become quite popular in Europe. Coffee houses sprang up in several countries and coffee even became the breakfast drink of choice for many Europeans.

From Europe, coffee spread to the Americas. However, coffee didn’t gain popularity there until the American’s revolted against the high tax on tea.

With the Middle East, Europe, and the Americas all falling in love with coffee, the demand for coffee beans increased exponentially. It was then that several colonial powers began to cultivate coffee beans.

The Dutch began growing coffee in Indonesia. The French grew coffee in the Caribbean. The Spanish started their plantations in Central America. And the Portuguese grew beans in Brazil.

It was then only a matter of time before coffee became a worldwide commodity.

How Is Coffee Produced From Coffee Plants?

As we’ve seen, coffee beans are the seeds of a coffee cherry. But there are a few steps to going from coffee cherry to freshly brewed coffee.

Let’s go through these steps one by one.

A newly planted coffee tree can be expected to bear fruit in 3 to 4 years. Once the coffee plants produce fruit there are two ways for coffee producers to harvest the cherries.

Stip picking removes all the cherries from the coffee tree and this can be done by hand or using a machine. This method is quicker and more efficient, but the problem with strip picking is that ripe and unripe cherries both get picked at the same time.

This can really affect the quality of your batch.

With selective picking harvesters only pick the ripe cherries. This can only be done by hand and the harvesters double back to the same tree every few days to get the ripe fruit. This method ensures only perfectly ripe fruit are picked, but it’s slow and time-intensive.

After harvesting, the fruit’s pulp has to be removed from the coffee bean. This can be done in one of two ways:

Dry processing is the old method of processing coffee beans. In this method, freshly picked coffee cherries are laid in the sun on large patios.

The cherries are then constantly raked and turned over until the raw coffee bean is separated from the fruit and the moisture content drops to about 10-12%.

Wet processing is a more modern method of processing coffee beans. With this method, the coffee fruit is washed and separated. (Fruit that floats is low density and is discarded)

The fruit is then put through a machine that separates the pulp from the seed. Seeds are then fermented to remove the mucilage.

Once the beans go through this process, they are sorted again and the bad beans are discarded.

The final step is to roast the coffee beans.

Roasting is the process of heating raw green coffee beans until they’re the brown, oily, and aromatic beans we all love.

The roasting process is part art and part science. So, beans from different roasters will taste different. However, the process is always basically the same.

Coffee beans are poured into a large drum. Heat is then applied to the beans which forces them to undergo chemical changes. These changes:

After this process, the roasted coffee is then packaged and sold all around the world.

How Many Types of Coffee Beans Are There?

There are 4 different types of coffee beans.

But as you may have noticed, most beans sold in the stores will either be arabica beans, robusta beans, or a blend of the two. This is because these two coffee species are the most widely produced so they dominate the market.

Let’s take a quick look at each coffee species to see what makes them different.

What Is Arabica Coffee?

Coffea arabica, also called Arabian coffee, is native to Ethiopia but was the first cultivated in Yemen. Arabica beans are by far the most popular coffee bean and account for around 60% of the world’s coffee production.

Arabica coffee can grow well in higher altitudes and can also survive cooler temperatures. Because of this, arabica beans contain less caffeine than other coffees and have a sweet and delicate flavor.

Today arabica coffee beans are grown in suitable regions all around the world.

What Is Robusta Coffee?

Coffea robusta is another species of coffee plant. Its scientific name is actually coffee canephora, and robusta is just one variety of this species. It’s indigenous to West and Central Africa and accounts for about 40% of the worldwide production.

Robusta beans grow at lower altitudes than arabica beans. They’re also easier to maintain, grow a larger amount of coffee, and have more disease resistance than the arabica coffee plant. Because of this, robusta beans are cheaper to produce.

The robusta species also has more caffeine and less sugar than arabica. So it produces a more bitter cup of coffee and lacks the delicate sweetness of arabica.

Coffea liberica is also known as Liberian coffee. Like robusta, this coffee plant is native to Western and Central Africa but was first cultivated in Indonesia.

Liberica is the tallest of all coffee species and it has the largest beans as well. But besides being large, these coffee beans also have a unique shape. One side is shorter than the other and instead of being rounded, one end is pointed like an almond.

Liberica beans are exceptionally rare and account for around 1% of worldwide production. So if you find them, you can expect them to be more expensive than either arabica or robusta coffee.

Excelsa has been reclassified as a variety of Coffea Liberica, but the two really do taste like completely different species.

Excelsa coffee beans have the acidic and fruity tastes characteristic of light roasts. But they also contain some of the deep earthy flavors you’d get from a dark roast. Although quite delicious on its own, Excelsa coffee is usually blended with other coffee varieties.

This is another rare variety and most coffee plants of this type are grown in South East Asia.

Where do Restaurants Get Their Coffee?

There’s no shortage of coffee supply companies out there that source coffee beans from all over the world. And restaurants choose the companies they buy beans from based on, price, quality, logistics, relationships, and many other factors.

So, if you want to know where coffee shops or restaurants get their beans, you’ll have to name a specific store first.

But don’t worry, we’ve got you covered! We’ve picked some of the most popular coffee shops and found where these restaurants get their coffee beans from.

Where Does Starbucks Get Their Coffee Beans?

Most of Starbucks’ signature coffee blends are sourced from the Asia-Pacific. However, because they offer a wide variety of blends, Starbucks sources some of its beans from Latin America and Africa as well.

Besides their regular blends, Starbucks also has reserves that they source from specific locations. For example, you may see their Rwanda Reserve or Peru Reserve which comes specifically from those countries.

Where Does McDonald’s Coffee Come?

McCafe sources its beans mainly from Central and South America.

These are 100% arabica coffee beans and while they come from Latin America, they are roasted in the U.S.

Where Do Dunkin Donuts’ Coffee Beans Come From?

Dunkin Donuts sources its beans from Central and South America. It specifically buys most of its beans from Brazil, Colombia, El Salvador, Guatemala, Honduras, Mexico, Nicaragua, and Peru.

The Bottom Line: Where Do Coffee Beans Come From?

From its humble beginnings in Ethiopia, the coffee plant spread to the Middle East where it was cultivated for several centuries before being taken to Europe and the rest of the world.

Nowadays, most of the world’s coffee is grown in Latin America, Africa, and Asia. And as people all over the world continue to drink coffee, this little bean will continue to be in high demand.

So what do you think? Where does your favorite coffee come from? Let us know in the comments below!