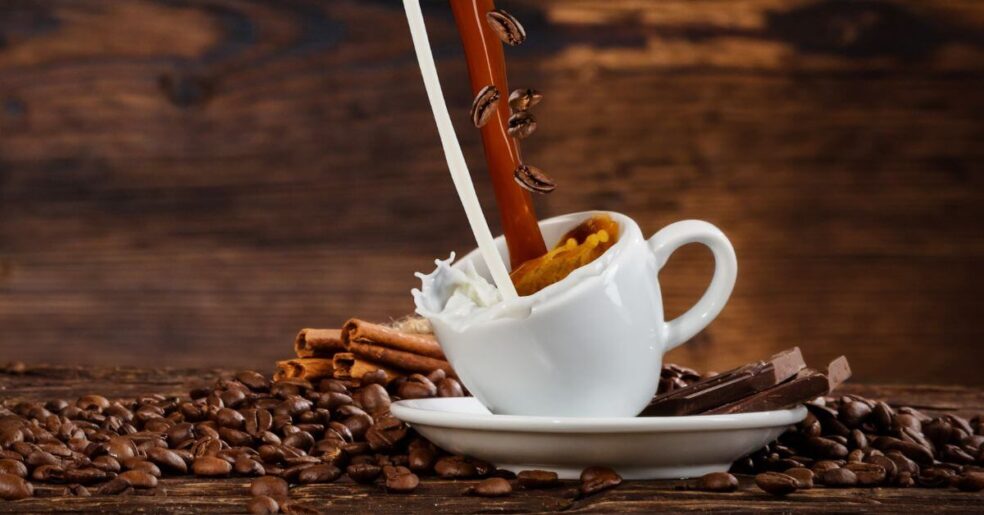 For a lot of us, milk and coffee go hand-in-hand. But instead of brewing coffee with water and adding milk after the fact, can you brew coffee with milk from the start?

In general, milk can be used to brew French Press, Pour Over, Cold Brew, or instant coffee. Since neither of these methods applies heat to the milk during the brewing process, it is unlikely to scald or burn. However, for most other brewing methods, water should be used instead of milk.

But keep in mind that milk contains fats, proteins, and other compounds that are not found in water. So, there are some adjustments you’ll want to make when brewing coffee with milk instead of water.

If you want to learn more about that, keep reading!

Can You Brew Coffee With Milk?

You can typically use milk to brew coffee if you’re using one of the following methods.

Neither of these methods has any real issues when milk is used. However, because milk contains several components that water doesn’t, it will interact differently with the coffee grounds.

Let’s take a quick look at some of the differences you’ll encounter when you brew your coffee with milk instead of water.

Differences When Brewing Coffee With Milk Instead Of Water

When it comes to brewing coffee, there are two main differences between milk and water that you’ll need to adjust for.

Milk Will Burn If It Gets Too Hot

When using water, the ideal coffee brewing temperature is 195°F – 205°F. (This temperature recommendation comes from the National Coffee Association.) However, because milk contains fats, proteins, and sugars, it can start to scald or burn at 180° F.

Do you see the problem? You can’t heat milk to the ideal brewing temperature without burning it.

The solution here is to heat your milk but keep it below 180°F. This will cause your coffee to extract slower, but shouldn’t be a problem.

Because milk contains fats, it will extract the coffee’s oils faster. These oils tend to have a bitter flavor, so coffee brewed with milk can become bitter more quickly.

However, the fact that milk is full of compounds means that other coffee solubles won’t extract as quickly.

So, while brewing good coffee is usually about precise measurements and temperatures, it’s less important when brewing coffee with milk.

Why Don’t Some Coffee Brewing Methods Work With Milk?

There are some brewing methods that work fine with milk, but many more that don’t.

First, because milk easily scalds, any heat that is applied by a coffee maker will likely burn your milk. This is why milk coffee should only be brewed using methods that use pre-heated milk and don’t apply additional heat during the brewing process.

Second, because milk is thick and easily scalds, it leaves a residue as it moves around the coffee maker. So, if you’ve got a sophisticated brewer with hard-to-reach places, the milk residue will be hard to clean and could easily cause mold to grow inside your brewer.

Now that we know why certain brewing methods are better than others, let’s talk in-depth about the methods that work with milk.

Coffee Brewing Methods You Can Use With Milk

As we mentioned earlier, there are four brewing methods that work well with milk.

We’ve personally tried each one and the coffee was fantastic. But each brewing method has its own pros and cons.

Using a French Press is a popular way to brew coffee with milk because it brews quickly, it’s easy to clean, and has a built-in filter for straining out the coffee grinds.

It also steeps the coffee grinds so you’ll get the maximum flavor in your coffee!

All of these factors make the French Press a great option. But the one drawback is that French Presses are typically small, so you won’t be able to make a lot of coffee all at once.

Using milk to make cold brew coffee is one of my favorite methods. It’s full of flavor, you can make a lot of it at once, and since heat isn’t used there’s no risk of scalding or burning the milk.

The drawbacks of this method are that it takes several hours to brew a batch and filtering out the coffee grinds can be tricky if you don’t have the right strainer.

(To read more about using milk for your cold brew, check out our post “Can You Make Cold Brew Coffee With Milk Instead of Water“.)

Brewing Pour Over Coffee With Milk

Using a pour-over machine to brew milk coffee is also a great option. Since you start out by pouring pre-heated milk over the coffee grinds, there’s no risk of scalding your milk in the coffee maker.

And because pour overs use filters, the grinds will be completely filtered out of your coffee.

Although the coffee doesn’t steep like in a French Press, the pour-over does result in full, rich flavors that we’re sure you’ll love.

If you don’t have a pour-over, check out the Bodum Pour Over on Amazon. This is the one we use and it works fantastically well.

Instant coffee is known for being very bitter, so it has a bad reputation among a lot of coffee drinkers. But making it with milk can produce a smoother and more mellow coffee.

Personally, I’ve noticed that instant coffee crystals don’t dissolve as easily in milk as they do in the water. So, to get the best results, make sure you mix it thoroughly and check that all the crystals are dissolved.

One other thing you can do is let your coffee crystals sit in the milk for a few minutes. This allows the crystals to absorb liquid which then makes them easier to dissolve.

Coffee Brewing Methods You Can’t Use With Milk

As we’ve mentioned, there are several coffee brewers that don’t work with milk. These methods don’t work for at least one of two reasons.

Let’s talk about a few of the most popular brewing methods that don’t work with milk.

As a general rule, you can’t use milk in a Moka Pot. The reason is that these brewers are placed directly on the stove, so the milk will definitely curdle and stick to the inside of the brewer.

However, there are some newer Moka Pot designs that allow milk to be used in the top chamber, such as the Mukka Express or the Bialetti Kremina Espresso Maker. (At the time of writing, neither of these items was available on Amazon, but hopefully, they’re back in stock soon.)

If you want to read more about using milk in your Moka Pot, hop on over to our post “Can You Use Milk In A Moka Pot“.

Coffee drip machines are one of the most popular brewers in the U.S. but they shouldn’t be used with milk.

For starters, any drip machine you use will heat the milk to around 200°F, which is above the burning temperature for milk.

Second, the drip machine is a complex device with lots of tubes and components. As scalded or burned milk travels through the system, it will leave residue behind and may even clog the system.

Because percolators are placed over direct heat, it’s very easy to scald any milk inside the pot.

But percolators have an even bigger issue than that. They work by continually heating the liquid and cycling it through the coffee grounds. So, the longer the percolator is on the heat, the stronger the coffee will get.

If you use milk in this process, not only will you scald milk at the bottom of the pot, but the constant cycling of hot milk will quickly curdle and burn the milk.

And trying to continually filter burned milk through coffee grinds, will only result in a clogged filter and burnt-tasting coffee.

You should never put milk inside an espresso machine.

Similar to automatic drip makers, these devices heat the liquid directly and have a complex inner working. As a result, you’ll end up with scalded milk all throughout the machine.

But unlike automatic drip makers, espresso makers use several bars of pressure to push water through the coffee grounds. If you use a more viscous liquid like milk, you’ll increase your machine’s internal pressure beyond what’s safe.

Other brewing methods don’t work because they tend to