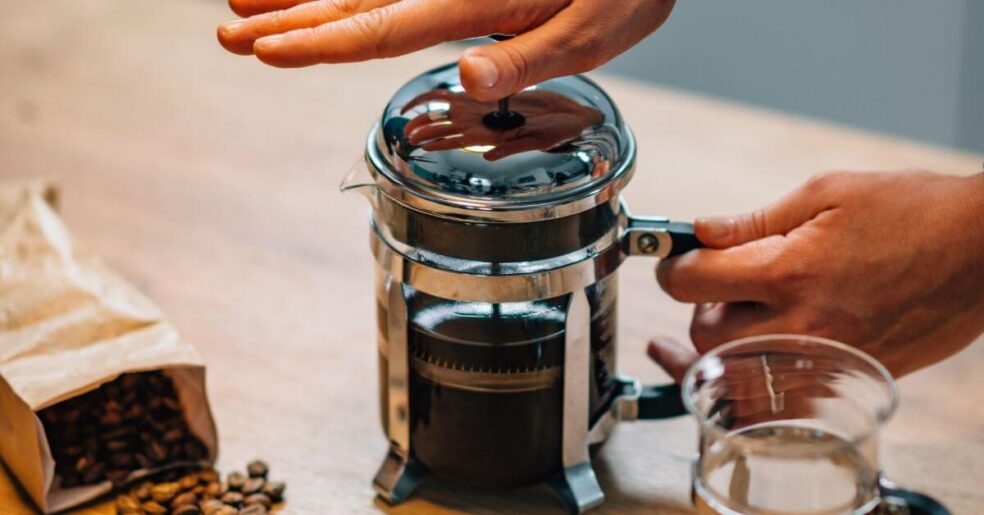 A French Press is an incredibly versatile device that can brew coffee and do many other things. But one thing you don’t expect it to do is explode!

French Presses can potentially explode if they’re under too much pressure. When fine coffee grounds clog the filter screen, pressure can build and prevent the plunger from being pressed downward any further. If you continue to press harder, the French press can explode.

If this happens, you could have a huge mess on your hands or possibly get injured. But don’t worry too much! There are a few measures you can take to prevent this from happening.

Why Do French Presses Explode?

In general, French Presses explode when two factors are present:

All French Presses have a mesh screen that prevents the coffee grinds from getting into the pressed coffee. As the plunger is pushed down, the brewed coffee passes through the screen while the coffee grinds are forced down.

The problem here occurs when small grinds clog the screen and prevent the liquid coffee from passing through.

Too Much Pressure Is Applied To The Stuck Plunger

A french press with a clogged filter is totally sealed. There’s glass on the sides, glass on the bottom, and packed coffee grounds sealing the top.

When this happens, the plunger feels stuck and it’s more difficult to push. Without realizing the issue, some people continue to force the plunger down.

And since there’s nowhere for the additional pressure to go the French Press eventually explodes.

What Happens When A French Press Explodes?

A French Press can only really explode in one of two ways.

In the case of shattered glass, you could end up getting cut, seriously burned, and creating a huge mess in your kitchen as well.

On the other hand, if your coffee explodes up and out, you could end up with a geyser of extremely hot coffee in your face and all over your kitchen.

Either way, it’s not good.

There’s actually been some litigation about this, so it’s pretty serious. Check out what this law firm had to say about an Exploding French Press on their blog.

What Can I Do To Prevent My French Press From Exploding?

The #1 thing you can do to prevent your French Press from exploding is to not force the plunger down if it feels stuck.

If it’s becoming way too difficult to press, pull the plunger out try cleaning the filter or removing some grounds (see method summaries below)

Besides that, there are a few things you can try to keep your French Press from exploding.

Use Coarser Grinds To Keep Your French Press From Clogging

It’s recommended to use coarse grinds for a French Press. Mainly because this brewing method extracts a lot of the coffee’s flavor and coarser grinds prevent over-extraction. (If you’d like to learn more about this, check out our post on grinding coffee)

But coarse grinds also make it more difficult for the filter screen to get clogged. Which makes it less likely that you’ll blow up your coffee maker!

There is a slight problem here – coffee beans are never ground 100% uniformly.

So even if you buy coarse ground coffee or grind it yourself, there will always be some smaller pieces that could potentially clog the filter.

But by using course grounds, the small pieces should be so few in number that they won’t create a problem unless they accumulate over several brews.

This brings us to our next method…

During the brewing process, part of what gets extracted from coffee is the coffee’s oils. These oils, along with the grinds, can get stuck to the French Press filter screen.

And over the course of several brews, this sediment can accumulate and make it more difficult to press the plunger. By thoroughly cleaning the filter you can prevent this from creating a problem.

To clean your brewer, pour warm water and a few drops of dish soap into the French Press. Then pump the plunger up and down until there’s foam.

This should remove any oils that are stuck to the filter. Pour out the soapy water, rinse the coffee maker out with fresh water and pump the plunger again to remove any residual soap.

While the coffee is steeping in your French Press, some grinds will naturally rise to the top, while others will remain on the bottom.

To prevent these floating grinds from getting packed in the filter screen, you can let them steep for a while and simply scoop them out before pressing the plunger.

Some also recommend that you stir your coffee while it’s in the French Press to break up the grinds.

If you’ve already started pressing your coffee and found that it’s getting harder to press, try pouring the coffee that’s already been strained into your mug. Then pull out the plunger, run water over the filter to rinse the grinds off, then reinsert the plunger and press the rest of the coffee.

Use A Metal French Press To Avoid Exploding Glass

Metal French Presses are much more durable than the glass version. They won’t shatter like glass, but it’s still possible for the coffee to shoot up and out if the filter is clogged and you apply too much pressure.

Keep in mind, there are a few reasons people avoid the metal French Press: