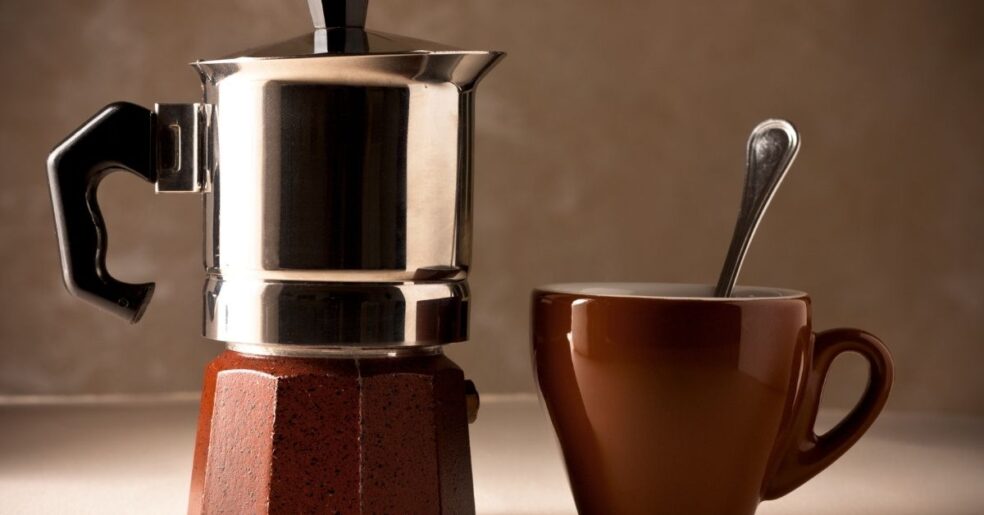 The Moka Pot and French Press are both iconic coffee makers, but which one is best? Well, there are several differences between the two and there are people on both sides of the Moka Pot vs French Press debate.

The main difference between the Moka Pot and French Press is the way they brew coffee. A Moka Pot uses steam pressure to extract a strong, espresso-like coffee. With a french press, however, the coffee is steeped in water and decanted using a press.

If you think a Moka Pot is for you, we’d recommend a Bialetti Express Moka Pot. Or if the French Press sounds down your alley try the Bodum French Press, Coffee Maker.

There are several other differences between these two makers, including the best grinds to use, the control you have over the brewing process, and even the quality of the coffee.

If you want to learn more about the differences between the two and which is best for you, read on.

What Is A Moka Pot

A Moka Pot is a small stovetop coffee maker. It consists of three parts; a bottom chamber that holds the water, a basket that holds the ground coffee, and a top chamber to collect the brewed coffee.

Moka Pots work by using steam pressure to force hot water through the ground coffee and up through the top chamber.

The Moka Pot was invented by Alfonso Bialetti in the 1930s when Italian households were looking for a way to make coffee quickly and efficiently.

And no, we’re not talking about pre-mixed, just-add-water coffee crystals. We’re talking pure ground coffee made from beans fresh from the roastery.

Coffee making back then was a laborious process, and Moka Pots gave Italians a hassle-free way to brew their coffee using a gas stove or even over a fire, without the need for complex machinery found in the espresso machine.

Making coffee with Moka Pots doesn’t take much skill – and because of that, it became highly popular.

Plus, there’s just something attractive about the shape of a Moka Pot – making it one of the more enduring visual icons associated with coffee brewing in modern times.

What Is A French Press?

A French Press is essentially a container that’s used to steep loose coffee grounds. It has a plunger attached to the lid that’s used to decant the coffee after brewing is complete.

Like its namesake, it is truly a unique French invention. According to legend, the creation of the French press dates back to the 1850s when a Frenchman prepared a pot of coffee on an open fire with a largely rudimentary version of the modern French press we see in many households.

Thirsty for a hot brew, the man boiled some water in a pot over an open fire. He found that once he added his coffee grounds to boiling water, the grounds rose to the surface of the liquid.

So he bought a piece of a metal screen from a passing merchant and fit the screen over the pot, using a stick to push the metal screen and coffee grounds down to the bottom of the pot.

Both men expected the resulting coffee to taste terrible, but as it turns out – it was the best coffee they had ever drunk.

The French Press is also known as a cafetiere, or a coffee plunger in some parts of the world

Fast forward to modern times, the humble beginnings story of the French Press has resulted in several design changes over the decades, producing a sleek-looking product that not only looks beautiful sitting on a countertop but makes some pretty darn good coffee too.

The french press and Moka pot brew coffee in different ways, but that’s not the only difference. There are several things you should keep in mind when choosing between the two coffee makers.

Let’s go through them one by one.

To make Moka pot coffee, the coffee grounds are first put into the filter, then the filter is placed in between the top and bottom chambers.

Subsequently, the top and bottom parts are screwed on together, and the entire mechanism is placed on the stove. The heat from the fire boils the water in the bottom chamber, and the pressure causes the steam to rise upwards and mix with the coffee grounds in the filter – resulting in a potent coffee mix.

When using a French Press, you have to first steep your coarse coffee grounds in the vessel with hot water, then place the lid on with the plunger pulled all the way up.

Let it steep for at least 3-4 minutes, then push down on the plunger to get any of the concentrated coffee grounds down to the bottom of the vessel. This leaves you with only the ready-to-drink coffee liquid in the pot. Coffee made in a french press tends to be more full-bodied and has a richer texture.

It’s hard to tell which one produces better coffee – and to state the obvious – it is really all about preference and taste.

The Moka pot produces a really strong and highly energizing coffee, with effects similar to that of espresso, which is the strongest form of coffee available. It mixes with milk or cream readily. However, when compared to the French Press, its strength can be considered its weakness.

Unlike the rich body and texture of french press coffee, Moka pot coffee is just a straight-up, hard-hitting shot of caffeine whenever you need a morning dose or a pick-me-up in the middle of the day.

French press coffee is less overpowering and in some cases, some would consider that it brings out the nuances and flavors of the beans used to make the coffee.

In this case, French press coffee wins when it comes to taste and quality.

Moka Pots are incredibly simple to use and so easy to clean, while most of the criticism about the French Press lie in the brewing process and the cleanup at the end. It takes a lot more work to clean a French Press than it does a Moka Pot – this means the Moka Pot equalizes the scorecard here.

On the Moka pot, however, you don’t really have much say in the matter. There isn’t much room for variance in the brewing method – another score for the french press this time.

Moka pot coffee is made using pressure, while a French press uses the steeping method to make coffee. Generally, the brewing time for both to make a drinkable cup of coffee is pretty much the same – up to 5 minutes.

However, brewing time can vary according to preference when using a french press. Overall, this section is a tie.

The Moka pot, with its aluminum or stainless steel construction, small size, and rigid body is the ultimate portable caffeine machine.

You can throw it in a weekend bag or in your luggage and not have to worry about breaking it – the same can’t be said for the french press, which has plenty of glass and fiddly bits used in its construction, rendering it significantly more fragile than the Moka pot.

For the Moka pot, however, you’ll need access to an open fire or a stovetop so if you’re staying in a hotel where an electric kettle is the only amenity available, then a french press is better. But because of its portability and build, it’s one point for the Moka pot.

Moka pots come in a few different sizes, with Bialetti, one of the best brands in the Moka pot business producing sizes that allow you to make enough coffee for 1 cup, all the way up to 12 cups.

French presses also come in many different sizes – however the smallest french press starts at 3 cups, and the largest makes up to a maximum of 12 cups. Because the Moka pot has a 1-cup version, we say the Moka pot wins this time.

Moka pots are usually made out of stainless steel or aluminum throughout and are more durable.

French presses usually use a combination of glass, plastic, and a little bit of metal in their construction. If both are subject to an imaginary drop test, it’s clear to imagine that the Moka pot is at a much lower risk of breakage as compared to the french press.

So, when it comes to durability and toughness, the Moka point gains one point here.

When it comes to price, Moka pots are known to be much more affordable, especially if you consider getting one of the smaller versions like the 1,2, or 3 cup sizes.

The Moka pot is commonly found in working families who want to make a quick cup of coffee in the morning before leaving for work. Because of its household connotations, the Moka pot is known to be a family-friendly coffee brewer that is cost-effective and gets the job done, brewing fuss-free strong coffee to kickstart the day.

The french press is largely considered to be the fancier option, partly because of how it looks, but even more so due to the fact that the coffee it produces contains more nuanced flavors and the fact that you can personalize the brewing process in many ways.

You’ll notice that the french press is found in homes of people who are really into coffee culture and treat coffee drinking as an experience in its own right.

Moka Pot vs French Press: Which To Buy?

Historically, the french press was reserved for the more cultured coffee drinker while the Moka pot was working-class and tough.

In modern days, however, the economic and social lines that come with either the french press or the moka pot have been blurred, with many holding either brewing method to the same regard. What it boils down to ultimately, is preference.

If you’re looking for a hassle-free way to get your morning shot of caffeine in a jiffy before you rush off for that morning meeting or the commute to work, then the Moka pot may be a good choice. Just load the filter up with coffee, fill the bottom chamber with water and fire it up on the stove to get a cup of coffee in 5 minutes or less.

If you treat your daily coffee drinking ritual with reverence, then the French press might be right for you.

You get to control every aspect of the brewing process, from the concentration and proportion of coffee grounds to the temperature of hot water to the steep time in the vessel itself.

With all that said, however, there isn’t anything to say that you can’t have both in your life. The Moka pot is there for you to make a hassle-free, strong cup of coffee in a flash, while the french press can be reserved for those more leisurely days where you have guests over or if you just want to take the time to practice a little self-care.