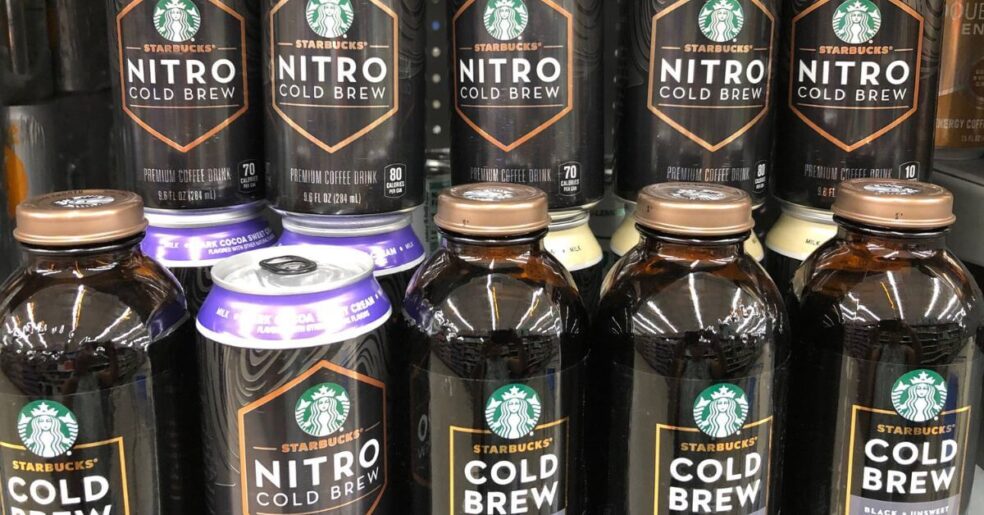 If you’ve just rediscovered a can of cold brew in the back of your fridge or found a couple of bottles that were left out for a few days, you may be wondering how long does unopened cold brew last.

In general, shelf-stable cold brew coffee can last up to a year if it’s unopened. These coffees are processed to survive long periods at room temperature without spoiling. By comparison, cold brew coffee that isn’t shelf-stable must be refrigerated and typically lasts for around 3 to 5 months.

However, keep in mind that this typically applies to 100% black coffee. If dairy or other ingredients are added to the cold brew, it may not last as long.

In addition to this, manufacturers have different processes that affect how long their coffee lasts. If you want to learn more about this and the lifespan of the different coffees out there, keep reading!

By shelf-stable, we’re referring to coffees that are kept on store shelves at room temperature. These coffees are able to survive so long because they’ve gone through a preservation process.

By contrast, coffees that aren’t shelf-stable don’t undergo this same process so they’re typically kept in the refrigerated section.

These coffees can usually be purchased as

Let’s quickly talk about each type.

Cold-brew on tap is coffee that’s been packaged in a box with a dispenser attached. (If you want to see what this looks like you can check out Java House or Wandering Bear Cold Brew on Amazon.)

This type of coffee usually undergoes thermal processing before packaging to kill off any bacteria. They’re heated to ultra-high temperatures (280°-300°F) for a few seconds and then packaged in pre-sterilized bags.

This is why cold brew on tap can last up to a year at room temperature if it’s unopened.

However, once it’s opened it should be kept in the refrigerator and consumed within 1 month.

You’ll find these cans on the grocery store shelf at room temperature. Since the cans are usually a single serving they don’t need to last as long as a box of cold brew on tap.

In general, a can of cold brew will last between 3 to 5 months unopened. However, this could vary depending on how fast the coffee gets from the manufacturer to the grocery store.

Cans of coffee also undergo thermal processing to make them shelf-stable. But they don’t go through the ultra-high temperatures like cold brew on tap.

Instead, they go through a process called retort. With this process, the coffee is sealed in the can and the can is heated to 160°-175°F using steam and water.

After opening, a can of cold brew should last one week.

The coffees you find in the store’s refrigerated section are processed as well. So, their “best by” date will usually be 3 to 5 months out.

However, they’re refrigerated for a reason, and shouldn’t be kept at room temperature after buying. And once opened, they should be kept refrigerated and consumed by the “best by” date.

Nitrogen is a preservative, so Nitro Cold brew does last longer than regular cold brews.

However, the best by date shown on your can may not be much different from regular cold brews.

For example, my can of Starbucks Nitro Cold Brew showed a date 5 months out from the time of purchase. This is about the same I’ll see on regular cold brews whether they’re shelf-stable or refrigerated.

(If you’re interested in trying Starbucks Nitro Cold Brew, you can find them in a local store or on Amazon.)

The dates listed on cold brew are “best by dates”. This means the coffee’s quality is best before that date.

Fortunately, coffee doesn’t generally go bad. So even if it’s past the date an unopened cold brew should still be ok if it was stored reasonably.

If you’re not sure about it, open up your cold brew and examine it first. Take note of the smell, appearance, and texture of your coffee before you give it a taste.

Homemade cold brew can last for 1 to 2 weeks in the fridge.

This is much shorter than the cold brews you’ll find in the store because commercial coffees undergo preservation processes.

How long your homemade cold brew lasts depends on several factors, including:

Since there’s a much greater risk of homemade cold brew being contaminated than commercial cold brew, you should always store your homemade coffee in the fridge and drink it within 1-2 weeks.

How Can I Preserve My Cold Brew Longer?

By storing your homemade cold brew in the refrigerator, it should last for 1-2 weeks. That’s normally the longest cold brew will last. But if you want to preserve it even longer you can try pasteurizing it or freezing it.

Honestly, I wouldn’t recommend pasteurizing cold brew coffee because the heating process will destroy a lot of the nuanced flavors cold brew is known for.

It’s also a lot of work to preserve coffee that you could easily brew as needed.

The other option is freezing your cold brew coffee. To do this seal your cold brew in an airtight container or plastic bag and store it in the freezer.

Alternatively, you can freeze your cold brew in an ice cube tray and store it for later.

If you choose to go this route your cold brew can last up to 6 months in the freezer.

How Do I Know If My Cold Brew Is Bad?

There are three main ways to test if your cold brew coffee has gone bad:

When it comes to taste, your cold brew should be smooth, nuanced, and less acidic than regular coffee. So, if it tastes vinegary, moldy, or even stale, you should throw it away.

Lastly, take a good look at your coffee. If you see any mold growths or spots, you should throw it away.