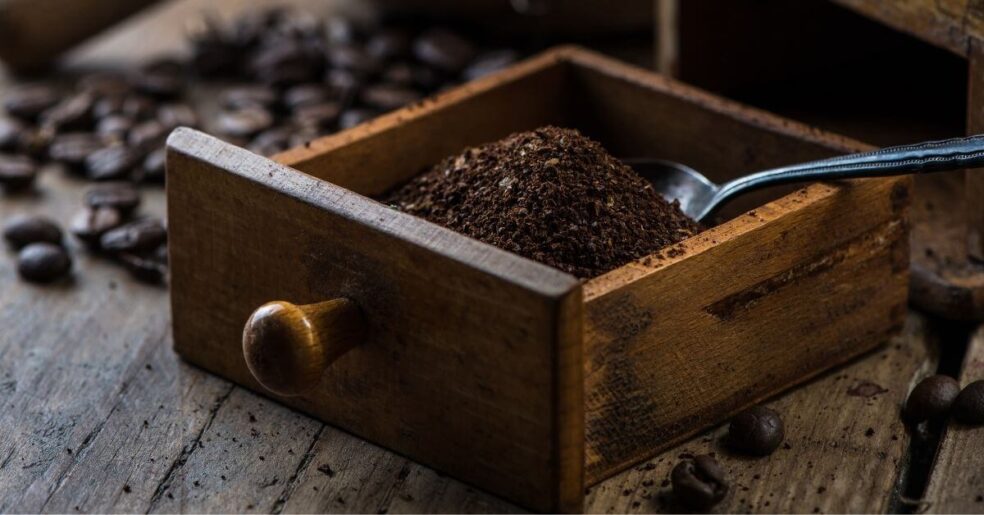 If you’re like me, coffee is an important part of your morning routine. But there’s usually not enough time to grind fresh beans in addition to doing everything else you have to do. So, is grinding coffee the night before a good idea? Or will it ruin your coffee?

You can grind your coffee beans the night before, but they will be staler due to increased oxidation. The rule of thumb is to grind your beans right before brewing to minimize flavor deterioration and ensure the highest flavor quality of your brew.

However, if you’re pressed for time in the morning, sacrificing some of your coffee’s complexity might be worth the convenience of grinding in advance.

Can You Grind Coffee The Night Before?

You can certainly grind your coffee the night before, however, it’s not recommended if you want the highest quality brew. But whether or not you should grind your beans in advance depends on what you expect from your morning cup of coffee.

I suspect that most people asking this question aren’t interested in tasting complex and exotic flavor profiles first thing in the morning.

Instead, they probably just want a decent cup of joe that will energize them before work.

If that’s your situation, grinding your coffee before bed is a good idea.

However, there may be a few people who do want to enjoy a nice specialty coffee in the morning. Or at least get the best flavor possible out of their beans. In that case, grind your beans right before brewing your coffee.

What Happens When You Grind Coffee The Night Before

When you grind coffee beans, the acids, oils, and other solubles that were sealed inside the bean are exposed to air. This means much more of the coffee’s flavors and aromas start deteriorating due to oxidation.

This is why the rule of thumb is to grind your beans as close to brewing as possible.

However, this is more of an issue for fresh beans than for beans that were roasted months ago.

Pre-grinding Older Beans Won’t Affect The Flavor As Much

Coffee beans will start to lose their vibrancy and flavor soon after they’re roasted; even if they’re whole beans. And if your beans were roasted more than 6 months ago your coffee is already pretty stale.

Don’t get me wrong; it won’t brew a bad cup of coffee, but it will have already lost the complexity and special quality you expect when grinding your beans fresh.

So, if you’ve got older coffee beans, grinding them the night before won’t affect the flavor as much.

Ground Coffee Can Absorb Odors From The Surroundings

Ground coffee is also known to absorb odors from its surrounding. And while this may be fine if you’re using it for household cleaning purposes, it’s not good if you plan on drinking it.

Depending on where you leave your ground coffee overnight, you run the risk that it’ll pick up some flavors that will make it undrinkable.

How To Store Ground Coffee And Keep It Fresh

The best way to store your ground coffee is in an opaque and airtight container.

If you choose to grind your coffee the night before brewing, don’t leave it uncovered. The best option we’ve found is to leave it on the kitchen counter in a dark, airtight container. (We left it in a Tupperware container covered by a kitchen towel.)

Buying Preground Coffee vs Grinding The Night Before

Grinding your coffee the night before will save you some time during your morning routine. But why not just buy coffee that’s already preground?

Due to its increased rate of oxidation, ground coffee has less flavor than whole bean coffee of the same age. If you grind whole beans the night before brewing they will oxidize more quickly, however, they will still retain more flavor than coffee that was purchased preground.

Preground coffee is packaged in bags with one-way valves. These valves allow carbon dioxide from the beans to escape, while not allowing oxygen to enter.

This protects your beans for a while, but once you open the bag your coffee will quickly begin oxidizing and losing flavor.

By comparison, whole beans are also packaged with one-way valves. And once you open the bag they will oxidize at a slower rate than the ground beans.

Who Should Grind Their Coffee Beans The Night Before?

Coffee drinkers that are short on time and just want a decent cup of joe to start the day will benefit from grinding their beans in advance.

Grinding the night before is a good idea if you,

Who Should Not Grind Their Coffee Beans The Night Before?

Coffee drinkers that have a little extra time in the morning or want the highest quality flavor from their coffee should not grind their beans in advance.

Also, don’t grind your beans the night before if you,

Making Cold Brew As An Alternative To Grinding The Night Before

If you’re the type of coffee drinker that doesn’t have a lot of time in the morning, and you don’t want to sacrifice any of your coffee’s flavor, you may want to try cold brew.

This can easily be done using a french press and takes anywhere from 12 to 24 hours to brew.

One of the huge benefits of cold brew coffee is that it actually emphasizes the complexity and nuance of your coffee bean, so you can enjoy specialty coffees even if it’s right before work.

It’s one thing to do research, but we wanted to taste the coffee for ourselves to know how much flavor was actually lost.

For each brew, we used a French Press with 2 tbsp of coffee for 6 oz of water. Coffee grounds were bloomed for 30 seconds and then the coffee was brewed for 4 minutes.

Here are our results.

We brewed our first cup with the freshly ground beans to get a taste for the coffee at its best.

The ground coffee was very aromatic. And the coffee we brewed had the robust flavor and full-bodied mouthfeel we expected from a medium-dark roast.

But of course, the first cup was expected to be good. It’s the morning brews that we were most curious about.

In the image below you can see how we stored the coffee grounds. The two Tupperware containers on the left are the fresh ground beans that we prepared to store overnight.

The two on the right are what the grounds looked like the next morning. (The larger Tupperware was stored in the refrigerator and the smaller one was left on the counter.)

As you can see, they haven’t really changed.

Brewing With Coffee Beans Left On The Counter

Brewing With Coffee Beans Left In The Refirgerator

If you’re going to grind your coffee in advance, I recommend not putting them in the refrigerator. They were more flavorful when they were left on the counter.