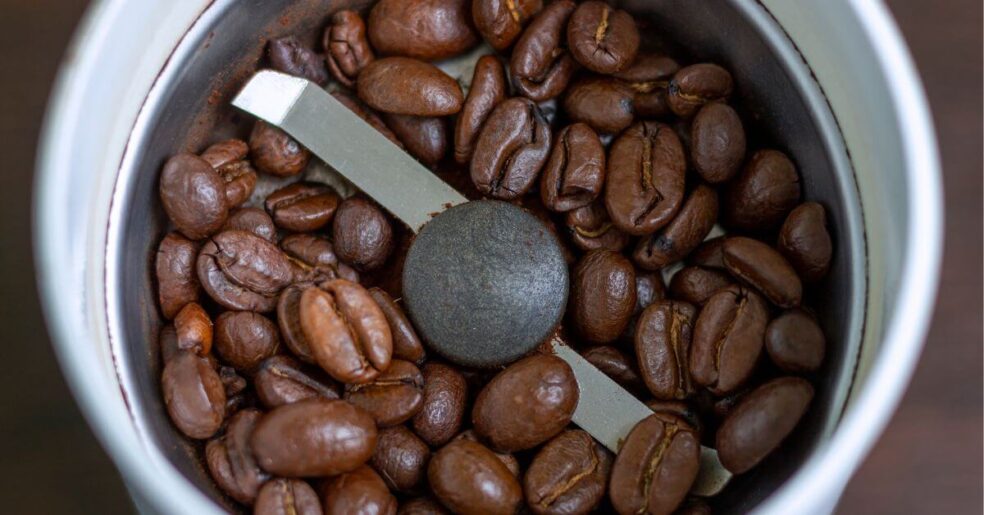 Any coffee enthusiast will tell you that a burr grinder is a better option than a blade grinder. But if you’re hesitant to spend money on a new coffee grinder you may be asking yourself “are blade grinders really that bad?”

Generally, blade grinders are considered inferior to burr grinders because of their inconsistent results. Since blade grinders chop and slice the beans into random size pieces, some grinds will be powdery while others will be large. This results in uneven coffee extraction and inconsistent brews.

However, just because blade grinders are inconsistent doesn’t mean they can’t make good coffee. In fact, we have a Mr. Coffee Electric grinder that we regularly use and recommend even though we also have a burr grinder. (link goes to Amazon.)

If you want to learn more about blade coffee grinders and how to get the best results with them, keep reading!

Are Blade Grinders Really That Bad?

Blade grinders have a bad reputation among coffee lovers for three main reasons:

However, these grinders aren’t as bad as they’re made out to be.

With a few simple tips (that we’ll talk about later) blade grinders are capable of giving you a fairly good grind.

Since the beans are literally being chopped to pieces, the size of the grinds will be pretty random – some will be large and some will be small. And these different-sized pieces will extract coffee flavors at different rates.

But how does this affect the quality of your coffee?

Also, since the grinding is random every time, each brew you make can taste significantly different from the one before.

Friction Could Heat Up The Beans

Because blade grinders spin in order to chop up the coffee beans, they generate a lot of friction. This friction could cause your coffee beans to heat up and result in burnt or bitter-tasting coffee.

While burr grinders do create some friction as well, it’s not nearly as much as a blade grinder.

The main reason for this is the randomness of the blade grinder.

The spinning blades cause a lot of the beans to hop and bounce around. And some beans spend much more time being hit by the blades than others.

The beans that are chopped over and over again can get hotter even though other beans aren’t exposed to as much friction.

Compare this to the burr grinder that slowly and methodically grinds the beans.

Blade Grinders Give You Less Control Of Grind Size

Because blade grinders don’t grind beans methodically, they give you less control over your grind size.

This is crucial because different brewing methods require a specific grind size to get the best results.

Typically, you’ll be told to grind for a short time for larger grinds and grind for a long time for smaller grinds. Then you’ll have to eyeball the result to determine when it’s the correct size.

Additionally, because of the randomness of blade grinders, some of your coffee grinds will always be too large and some will be too small.

What Are the Benefits Of A Blade Grinder?

Although blade coffee grinders get a bad reputation, and do have some drawbacks, they also have their benefits.

In fact, we have a Mr. Coffee Electric Grinder that we regularly use and would recommend to anyone. (link goes to Amazon)

There are three main benefits to blade grinders that make them a good option in some cases:

In terms of affordability, blade grinders are the clear winner. Since they’re simpler and made of less durable materials than burr grinders, they tend to cost less as well.

This makes them a great option for the casual coffee drinker who just wants a decent cup of coffee.

As for convenience, blade grinders are much easier to use and clean than burr grinders. It’s often as simple as pouring coffee into the grinder and pressing a button.

This gives them the advantage if you’re trying to make coffee with limited time.

Is It Better To Use Pre-Ground Coffee Than A Blade Grinder?

As a general rule, it’s better to use a blade grinder to grind whole-bean coffee than buy pre-ground beans.

The reason is that pre-ground coffee will oxidize and lose flavor much quicker than whole-bean coffee. And even with the potential issues of blade grinders, the loss of flavor is a more critical issue.

However, depending on your brewing method and the freshness of your pre-ground beans, there may be pros or cons to choosing one over the other.

For example, Moka Pots require medium/fine grinds, so the best option is to buy fresh pre-ground coffee. On the other hand, French Press uses medium/coarse grinds, so a blade grinder is a great choice for this method.

Which Coffee Brewing Method Works Best With A Blade Grinder?

In addition, since the French Press is an immersion brewing method, it’ll contain much more flavor than pour over or the drip method.

Speaking of pour-over and drip brewing, these two methods can work decently well with blade grinders as well.

However, we don’t recommend using coffee brewing methods such as Moka Pots or Espresso Makers with blade grinders. These methods require fine grinds, which you won’t be able to get with a regular blade grinder.

How To Get A Consistent Grind With A Blade Grinder?

If you want to get the most consistent grind possible with a blade grinder, there are three techniques you can implement.

These tips come from James Hoffman which he describes in one of his YouTube videos, but we’ll go ahead and summarize them for you below.

Stop And Shake Your Grinder Frequently

The first thing to keep in mind when grinding with a blade grinder is that it’s not good to constantly run the grinder. If you do, you’ll end up with some super fine pieces and some much larger pieces.

Continue doing this until your beans are the size that you want.

Use A Sieve To Filter Out The Larger Pieces

Even with the stop-and-shake technique, you’ll end up with some large pieces in your blade grinder.

To get the best-tasting coffee, you’ll want to filter these out. Use a sieve or a strainer to filter out the larger pieces while letting the smaller pieces go through.

Doing this will provide for a much more consistent grind and reduce the sourness in your coffee. But you’ll still have the problem of the small, powdery grinds slipping through the sieve along with the medium grinds.

This is where the last technique comes in.

Use A Paper Towel To Filter Out The Small Pieces

To remove the small, powdery grinds, pour your coffee grinds onto a paper towel and rub them into the paper.

Then pour your beans back into the grinder or your coffee brewer. The small grinds will remain stuck to the paper.

By doing this you’ll get the most consistent grinds possible with your blade grinder. However, it’s a lot of extra work.

The quickest and easiest way to get consistent grinds is to just get a burr grinder like the OXO Brew Conical Grinder.

There are also benefits to blade grinders. Specifically: